Feeding ducks, swans and geese is a great way to enjoy getting close to them. It's a really good way to introduce children to wild animals for the first time, and for everyone to connect or reconnect with wild nature.

Here are a few tips and facts to help you help the birds you feed.

Is bread good or bad for waterbirds?

Our opinion is that bread is fine for water birds as long as it only forms a small part of their diet.

Moderation is especially important in the spring and summer when an unbalanced diet can cause developmental problems for growing young birds.

But moderation is hard to judge when other well-meaning people may also be feeding bread to the same birds at other times. So it will often be safer for the birds to feed them other healthier foodstuffs, for example:

When and where is best to feed water birds?

Winter is the best time to feed water birds, when natural vegetation is in short supply and other people are less likely to be out offering food.

Additional food is less vital in spring and summer, when young birds need to learn to forage for plants and insects, for a balanced diet and good physical development.

Throwing the food into the edge of the water, rather than trying to entice birds up the river bank or shore, will often be safer for them. This will also reduce the risk of uneaten food attracting rats or foxes who may also prey on young birds.

Only offer food if the birds are taking it. Don’t throw excess food into the water – too much can affect the water quality and create algal problems or conditions for botulism to develop, which can kill large numbers of birds. In general, in hot weather avoid adding food to water to avoid these problems.

Never use old food that is going mouldy. This can be directly harmful to birds and cause fungal diseases such as aspergillosis.

Here are some of the questions we’re often asked:

Research suggests that too much bread can harm birds.

Amongst WWT’s research, a study of two swan flocks, eating a low and high proportion of bread respectively, found the flock eating more bread had poorer muscle development. This suggests that, among other factors, a bread-heavy diet could make birds physically weaker.

The same study also found the flock eating more bread were less likely to forage for other food when the bread food source was removed. This suggests swans can become ‘hooked’ on bread and be at risk of starvation where bread is introduced and then removed.

Q: Can bread cause the condition “angel wing” in birds?

Too many birds in a small area can create problems. A local build-up of poo can increase disease risk for the birds and other wildlife. They can trample and damage the waterside environment, as well as themselves as they fight for territory.

A flock of wildfowl “hooked” on bread will always be in a vulnerable position due to disinterest in other foods. If for example the flock has grown around a riverside café, then that café closes, the birds are then at risk of starving.

For all these reasons, WWT recommends that ducks, swans and geese be fed with vegetables, grain or specialist food where possible. That way, you can be as sure as possible that you are helping the birds rather than inadvertently causing any problems for them. 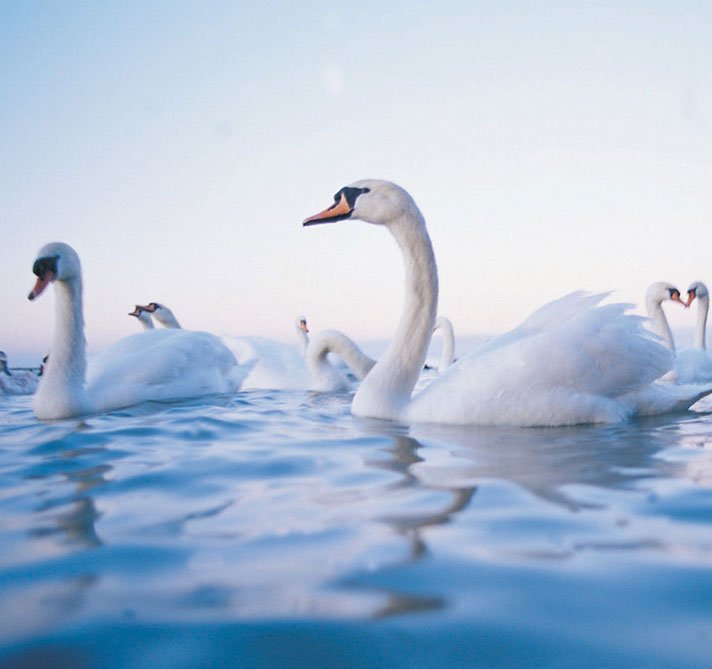 Where to see swans

Our centres are some of the best places in the UK for swan sightings, where you can feed them with pre-approved food safely.

For the Bewick's swan, there are much more complex problems to solve. WWT is piecing together the jigsaw that could explain its dramatic decline.