Native animals and plants are under constant threat from alien invaders.

While most foreign species aren’t harmful to native species and add richness to our wildlife, some can be extremely damaging. These are termed as invasive non-native species, or INNS.

Why are invasive species a problem?

It’s important to note that no species is ‘bad’ or ‘good’ inherently – native species in the UK are kept in balance by many different processes, including what eats them. They become invasive when natural predators or disease are absent and conditions for growth and reproduction are good.

INNS cause native biodiversity to fall by spreading disease or outcompeting native species for food or space. Therefore native species, harmless in the UK could (and do) cause chaos in other areas of the world. The more geographically sheltered a species is, the more likely it is to upset the balance in a new ecological set-up if human interference moves a species location.

In 2010, a study estimated that invasive species cost the British economy £1.7bn per year.

Why are invasive non-native species on the rise?

INNS are becoming more prevalent as people and materials travel more widely around the world. In future, climate change may also allow species to thrive further away from their native range.

Our wetland wildlife is particularly vulnerable to INNS because water provides easy pathways to spread and grow. Some aquatic plants carry additional problems because, even where they’ve been locally eradicated, tiny fragments can break off and float or blow away and regrow.

Examples of damaging aquatic INNS to our wetland wildlife include:

In its native South America, this evolved to colonise huge open wetlands and cover them in thick dense mats of foliage. Introduced to the UK as an ornamental pond plant, here it quickly grows out of control and can choke waterbodies of oxygen, light and space – destroying entire wetland ecosystems.

This species spread from central Asia via the hulls and ballast tanks of ships. Like aquatic plants, the mussels can grow in dense mats which block water pipes. Quagga mussels can wipe out local micro-food sources and their waste can change the chemical composition of waterbodies. They are responsible for wiping out water life in lakes across North America, and were first found in the wild in the UK in 2014. 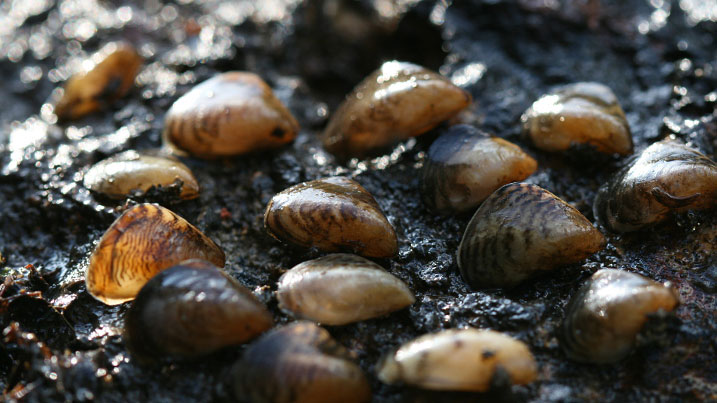 These were introduced from North America in the 1970s for UK restaurant menus but escaped into the wild. They are larger than our native UK species, the white-clawed crayfish, which they have wiped out from large areas through competition and spread of disease (similar to how grey squirrels have marginalised native red squirrels). They can also destabilise river banks from burrowing causing erosion. [Photo credit: NNSS]

These are especially well known for wiping out entire riverbank colonies of the UK’s most threatened wetland mammal, the water vole.

“Killer” shrimp and terrapins are among the other animal INNS which affect British waters. But aquatic plants carry a more widespread threat as they’re easily spread through gardening practices and once they have established in the wild are very difficult to control and eradicate.

What WWT is doing

WWT is one of the main conservation organisations involved in bringing in laws to restrict the import, sale and release of INNS. Through lobbying politicians, and through being part of a government group to tackle the issue, we’ve helped to take damaging INNS aquatic plants off garden centre shelves.

Our wetland centres are always finding ways to tackle INNS:

What you can do