Which are the most damaging invasive plants to look out for?

Although a pond or mini wetland is a fantastic addition to any garden, if not cared for properly, some pond plants can take over and can cause untold damage if they’re allowed to escape into the wild. Garden ponds are particularly vulnerable as people often inherit invasive plants or transfer them accidentally from other ponds.

But how damaging could a ‘water lettuce’ be? Or a ‘skunk cabbage’? The answer is very. It’s estimated that invasive and non-native species cost the British economy at least £1.7bn per year. Non-native invasive wetland plants can spread rapidly and outcompete native plants, clog our waterways and lead to an increase in flooding. They can also remove oxygen, killing local wildlife. Seeds and fragments of these plants can be transported by water throughout the whole river catchment or floodplain and once in, they’re extremely hard to get rid of.

Why are invasive species a problem?

We’ve listed some of the most problematic plants below so you can keep an eye out for them in your garden or when you’re out and about near wetlands, but this information is intended as a quick ID guide rather than a manual.

Thank you for helping wetlands! Just remember when removing invasive species yourself – compost with care and check, clean and dry your equipment after use so that you don’t accidentally spread them into the wild.

None of these plants are legally for sale in the UK and it's an offence to plant them into the wild. But that's not to say they're not out there - far from it!

Ones to watch out for: still found in garden centres

The above list is intended as a brief guide for some of the more common invasive species you might come across in your local wetland. For more detailed information, the GBNNSS has ID cards for each of the above species to help you in your identification, and Plantlife have a downloadable PDF guide.

Find out more about how to dispose of your unwanted garden plants safely and securely. 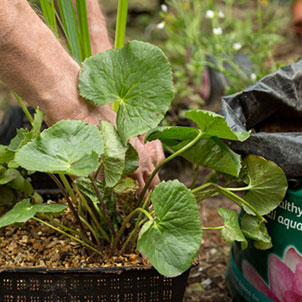 How to choose native wetland plants

The types of pond plants you'll need for your new wetland, and which ones to avoid. 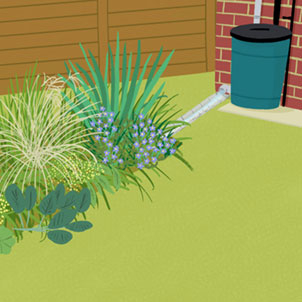 How to make a rain garden

Find out how you can help wildlife and fight urban flooding at the same time! 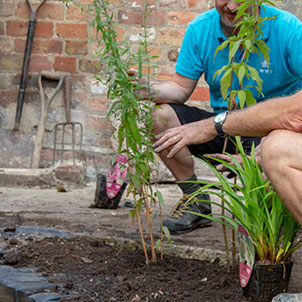 How to create a bog garden for wildlife

What you can do with that pesky part of your garden that always seems to collect water.