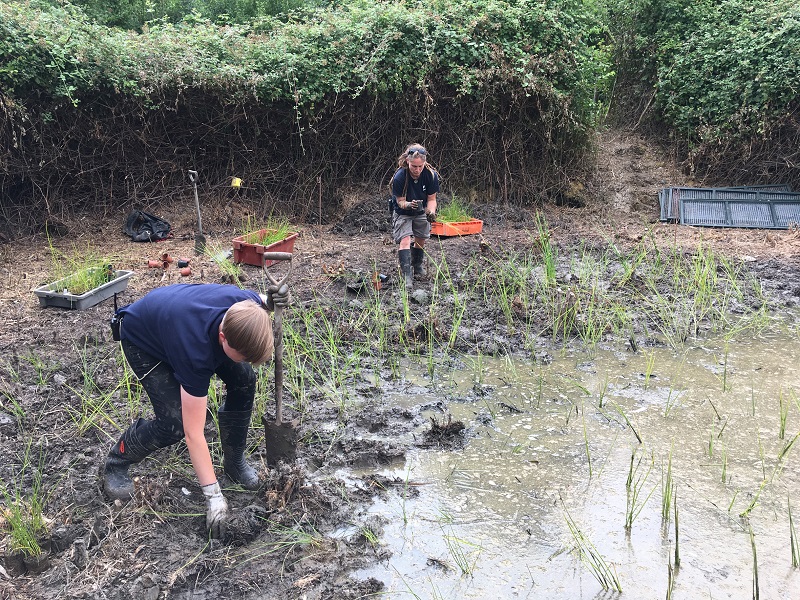 A plant so rare that it was only found in a patch smaller than a doormat has been reintroduced to the Arun Valley where it once thrived over a hundred years ago.

A total of 400 triangular club-rush plants were established over an area of 20 square metres in the Arun Riverlife lagoon which will be managed by WWT to reverse the hands of time and encourage the shrub to seed. The hope is that it will spread and colonise the waterways of the wetland reserve  and its old haunts along the Arun estuary.

The critically endangered schoenoplectus triqueter has always been rare in the UK, restricted to the top end of a few estuaries along the south coast of England. This perennial sedge is recognisable by its bright green, three-angled stems reaching a height of 150cm with its humble brown flowers blooming in mid-summer.

“We are thrilled to welcome this rare plant back where it belongs.

“Unfortunately by the end of the 20th century this nationally rare plant was on the brink of extinction throughout the UK.

“Hopefully this is the beginning of its way-overdue come back.”

Habitat and environmental changes along historic growing sites on the Thames, medway and Arun meant conditions were no longer favourable for the species.

Eventually its presence was restricted to just a few plants covering less than the area of a front door mat on the upper reaches of the Tamar estuary at one spot along the Devon bank.

The plant has been subject to a recovery programme since the mid-nineties, bringing together various conservation organisations to try and ensure its survival.

Natural England and the Environment Agency have provided expertise and funding while commissioning Panscape, an independent consultancy, to carry out much of the fieldwork.

Initial actions identified in the UK Biodiversity Action Plan, have been refined and gradually, through trial and error, the population of the triangular club-rush has increased on the Tamar and has now been reintroduced to Arun’s riverside.

In the mid 1990’s, a shoot from the triangular club-rush was taken from the Tamar to be cultivated at Wakehurst Botanic Gardens in West Sussex. The site, owned by the National Trust, is used and managed by the Royal Botanic Gardens, Kew for plant research and also to house the Millennium Seed Bank.  This not only prevented the plant from extinction but also provided material for the Royal Botanic Gardens’ plant scientists to propagate new stock to be transplanted back to notable strongholds in and beside the Tamar estuary.

The transplants have been annually monitored by Panscape and in 2017 the native population increased from less than 0.5m at its low point in the 1990’s to an area of over 80 square metres with many plants successfully flowering and producing viable seed.

Natural England and WWT began talks to bring the plant to Arundel in 2017 and in spring, a suitable spot was selected.

From the Discovery hide on Arun Riverlife lagoon visitors to Arundel Wetland Centre will be able to view this incredibly rare plant , which will hopefully prosper in its historic home.