Complex, fascinating and mesmerising, bats are shrouded in darkness and mystery - in reality, they are highly sociable mammals, expert insect hunters with some unique habits.

There are 18 species of bat that can be seen in the UK’s wetlands. You are likely to see them darting about, amongst the trees and above the water, on a summer evening. In flight they are fast and jerky as they dodge about chasing small insects, which they can catch and eat on the wing. Most British bats are small with wingspans shorter than a sparrow. However, our largest bat, the noctule, can have a wingspan up to 50cm. Bats may be superb fliers, but they cannot compete with the birds, so they have made the night skies their own.

What do bats eat?

Bats feed on insects in a wide range of habitats from wetland, woodlands, hedgerows, grassland, farmland and urban habitats. Freshwater wetlands provide a plentiful supply of insects for many bats. They generally emerge from their roost around 20 minutes after sunset and fly 2-10m above ground level searching for their food, which they catch and eat on the wing using a technique known as aerial hawking. A single tiny pipistrelle can consume up to 3,000 insects in one night.

You are most likely to spot Daubenton’s bats in wetland areas, hunters that have adapted to catch aquatic insects by trawling across the surface with their feet and literally scooping up the aquatic insects.

Where do bats live?

Bats live in roosts and they need different roosting conditions at different times of year. Some bats prefer hollow trees, some like caves and some use both at different times. Many bats shelter in buildings, behind hanging tiles and boarding or in roof spaces. Bat boxes are also put to good use.

Noctule bats tend to prefer tree holes, while pipistrelles can often be found in buildings. Serotine bats are likely to be found roosting in buildings, including mansions, stables and barns, while a hunt under old bridges may well turn up a Daubenton’s roost - they are water lovers and like to be nearby.

Britain’s largest species, the Noctule looks even bigger when in flight with its wingspan of 35cm. The first species to appear, it flies high in the air, dramatically stooping in its flight path every so often. Favourite food items include non- biting midges, also larger moths and beetles.

Britain’s smallest bat species group, the weight of a 2p coin. With a wingspan of 20cm, these bats appear bigger in flight.

Pipistrelles usually appear about 10 minutes after the first Noctules appear, but fly closer to the ground. They will often hunt up and down a regular ‘beat’, twisting and turning as they detect and pursue tiny insects.

These bats usually appear about 30-40 minutes after the first Noctules. Daubenton’s bat is fascinating to watch on a moonlit night.

Its particular speciality is hunting insects on the surfaces of ponds or lakes: as it swoops down towards the water, it flicks its tail or feet across the surface, swiping resting insects into the air to catch them.

Serotine derives from the Latin word for evening. It is sometimes known as a silky bat for its smoky brown fur. Less common than the others, its numbers are declining.

It appears at dusk and then very late, near the dawn. It has broad wings and a leisurely flapping flight interspersed with short glides.

But don't underestimate its agility, as it can catch large flying insects on the wing, crunching them up and discarding the wing cases. It feeds closer to the ground than the noctule and sometimes belly flops onto vegetation to flush out beetles.

Threats to bats in the UK

More recent dangers facing bats include timber treatment with toxic chemicals such as creosote and artificial lighting, which some species of bat, such as Daubenton’s and long eared bats, avoid. The decline in serotine numbers is speculated to be because serotines favour roosting in buildings, making them more sensitive to the effects of toxic building materials. The serotine is hardly ever found in trees, appearing to have abandoned what would have been its pre-civilisation roosts to become semi-reliant on our structures. 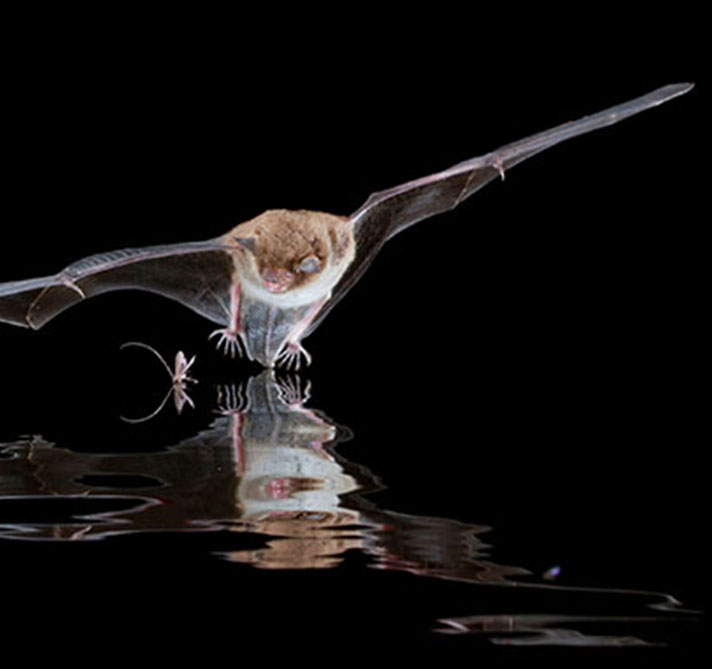 Seeing bats in the UK

Wetlands are prime habitats for hungry bats. Find out more about where to find them and how to spot them at night when it's dark.

Make your garden wildlife-friendly for bats

A mini-wetland garden full of invertebrates is a great way to provide food for bats and birds.