Ducks really are the quintessential water bird, with all species seen below strongly associating with water. They have waterproofed feathers and webbed feet.

Where do ducks live?

The species listed here all visit the UK at some point during the year. Some breed here but some are with us only for the winter months, instead breeding in Scandinavia and even on the Arctic tundra.

What do ducks eat?

Dabbling ducks tend to be found on freshwater and usually feed on weeds, seeds and small invertebrates, dabbling their wide beaks close to the surface of the water, or just below it, upending themselves to reach food, rarely diving. Their legs are placed centrally, meaning they are good at walking on land. Wings are long and pointed so they can take off from water without a run-up.

Diving ducks on the other hand rarely dabble, instead choosing to dive for their food, some down to great depths – the eider can dive 30 metres to forage for mussels! Diving ducks legs are placed far back, allowing them to use them as paddles but not so great when walking on dry land. Their wings are also often shorter and rounder than the dabblers, again aiding swimming, which means when taking off from water they need more of a run-up. The ‘sawbills’ are the only group of ducks listed here that are specially adapted to catch fish.

Our most familiar duck, found on a wide variety of water bodies, the drake with a beautiful iridescent green head. Only the female quacks! They’re with us all year round but numbers will be increased by winter migrants. Interestingly, the mallard is the ancestor of most breeds of domestic duck.

Just slightly smaller than the mallard and the female plumage is confusingly similar. The male plumage may seem plain but look closely at the breast and intricate ‘vermiculations’ can be seen. Some spend the summer with us but many more over winter.

An elegant, slim duck, the males have unmistakeable long tail feathers and a chocolate-coloured head. Again, the females are similar to mallard and gadwall, but noticeably more finely patterned. A small number breed in the UK but most are with us for the winter months.

Named for their very large bill, this is a very easy way to distinguish from other duck species, even with the otherwise mallard-looking female. Male plumage is striking, with dark green head, chestnut sides and blue forewing in flight. Most birds are in the UK all year round, but numbers are supplemented by winter migrants.

A gregarious species, often forming ‘carpets’ as they graze grasses adjacent to water. Once spooked, they will take off as one, back to the safety of the water. Females are generally chestnut coloured, which males show on the head along with pink breast and light-grey sides and can often be heard calling ‘wheeoo!’. A small number breed in the UK but most are with us just for the winter months.

About a third the size of a mallard, these small ducks are able to rise almost vertically when alarmed. Males are easily identified by the chestnut and green head and horizontal white body stripe. A number of birds are with us all year round but numbers are supplemented in the winter months.

Our only species of summer migrant duck, they are most often seen on migration in spring and early autumn on their travels from central Africa. In spring the males sport a white crescent over the eye and pointed black and white scapulars on the back. However, come August and their eclipse plumage looks much more similar to the females and they can be tricky to distinguish from teal, let alone one another! The male’s distinctive call can sometimes be heard, said to be like scratching the teeth of a comb.

A large, goose-like duck, it can be seen across many wetlands, mudflats and fields. They often nest in a burrow underneath bushes or buildings – sometimes in the base of a hollowed-out willow tree! Striking plumage, male has a large red bill knob. Look out for large broods of ‘humbug’ coloured ducklings in late spring. Most birds are here year-round.

These beautiful birds are native to east Asia but feral populations became established in the UK early in the 20th century. They are now quite widespread and are of course very easily identified, particularly the colourful male.

The male is a smart mix of black, grey and red whilst the females are of a similar pattern but with colours much more toned down. A small number breed in the UK but numbers are increased over winter.

They’re larger than common pochard but the plumage is similar, with the males sporting a fiery perm! Some wild birds are seen in the UK but it’s likely that all of the breeding birds in the south of England are populations established from escaped collection birds.

Can look similar to the tufted duck but note light back on the male, rounded head and broad, low body. Can be found on both freshwater lakes and on saltwater during the winter in the UK.

The funky hair-do on these birds is longest on the male, adding to the dapper black and white tuxedo look. Some females can be confused with female scaup as they can sport similar white face markings, but the bill pattern and body shape differentiates them. Many are with us all year round, but many more winter with us.

The heaviest duck to be seen in UK waters and also the fastest flying. Rarely seen away from marine habitats, many breed around the northern half of the UK coast but disperse in winter, diving to feed on mussels, as do many other sea ducks. When displaying, the males make a distinctive ‘waaooohh’ call. In Iceland, nests are farmed for eiderdown.

Males are jet black with a small amount of yellow on the bill whilst females can be identified by the pale cheek patch. A small number breed in Scotland and Ireland but are in decline and are now red-listed. Large rafts of birds can be seen around UK coasts in winter.

Compared to common scoter, velvet scoter are heavily built with a chunky, wedge-shaped bill along with usually having white in the wing. Adult males have more yellow on the lower bill and white under the eye. These smart birds breed on the Russian tundra, across Scandinavia and along the coasts of the Baltic sea. In the UK, they're seen on the sea during winter.

Males have a black and grey colour pattern with distinctive elongated tail. Breeds across northern Scandinavia and the Arctic tundra. Can be spotted on salt or freshwater around the UK during winter.

The males are mostly white with a green head, females grey with a brown head. Males impress the females with a mechanical display of heads on their backs and then in the air, making a rattling noise. Can be seen on freshwater and saltwater. A small number breed with us but many more are here for the winter months.

These birds have a hook at the tip of the bill and lamellae along the edges to help grip fish, they specialise in diving for prey.

A small number winter with us, having bred in boreal forests in the far north of Scandinavia. Could they win in the competition for best looking drake with their white and black plumage and stylish quiff?

The males’ head is a glossy dark green and the belly can be tinged pink during winter. Females are much greyer with a dark red-brown head, sharply bordering the grey neck. The bill is horizontal with a slight downward hook at the end. A small number breed in the UK, usually found on the middle course of a meandering river, taking advantage of low-hanging vegetation. Numbers are increased by winter migrants, often seen on bodies of open freshwater.

Similar to the goosander but can be told apart if care taken. Mergansers are of slighter build and have a slim, slightly upturned bill with a shaggy head crest, the males’ being a glossy dark green. Females have a red-brown head but there’s a diffuse border where it meets the breast feathers. Normally found in marine habitats but some do breed in the UK inland. Can be seen around our coasts in the winter.

My duck doesn’t look like any of the above...

Males and females are easy to tell apart in breeding plumage, but when moulting over the summer months, males enter ‘eclipse’ plumage which can be very difficult to differentiate from normal female plumage. The eclipse male mallard in the background of the below image now looks very similar to the female!

Summer is also a time when young birds are beginning to make their own way in the world and many won’t yet have reached a recognisable plumage. Some look similar to females.

There is a small chance that you have come across a rarer, vagrant duck species, perhaps something from North America. Ideally try and get a picture and consult with bird-watching friends. Although it does happen that when spotting a species out of the ordinary, it has escaped from a bird collection.

Many ducks also hybridise with other species or with domesticated breeds. Most domestic duck breeds descend from mallards, so they are most often spotted.

How WWT are helping

Providing wetland habitat is a key part of keeping duck populations healthy. At WWT sites around the UK, you will be able to see many of the above (mostly freshwater) species. The best time to visit is during the winter months when some reserves will be busy with thousands of duck.

WWT have a long history of protecting migratory waterbirds by monitoring their populations along their flyways, from investigating the declines of common scoter to saving the Baer’s pochard in China. In 2019 we made history by rearing and releasing the world’s rarest duck in Madagascar, saving it from certain extinction. But without places to live, ducks couldn’t survive, so we prioritise protecting and restoring their wetland habitat to benefit as many wetland species as possible. 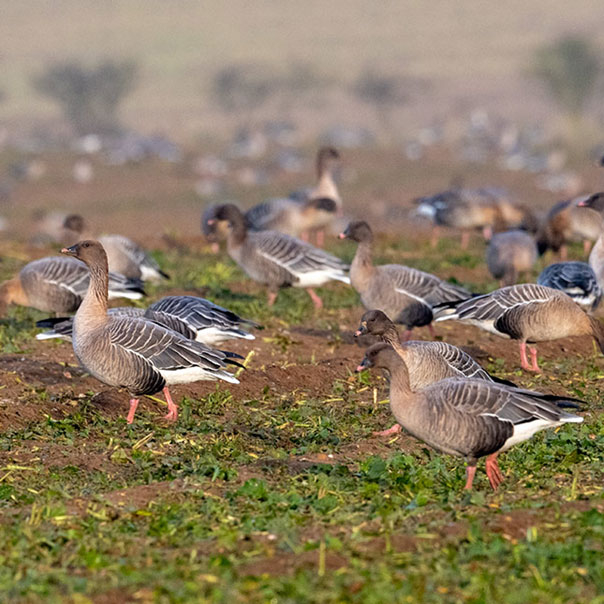 What makes a goose a goose, and who can you see in the UK? 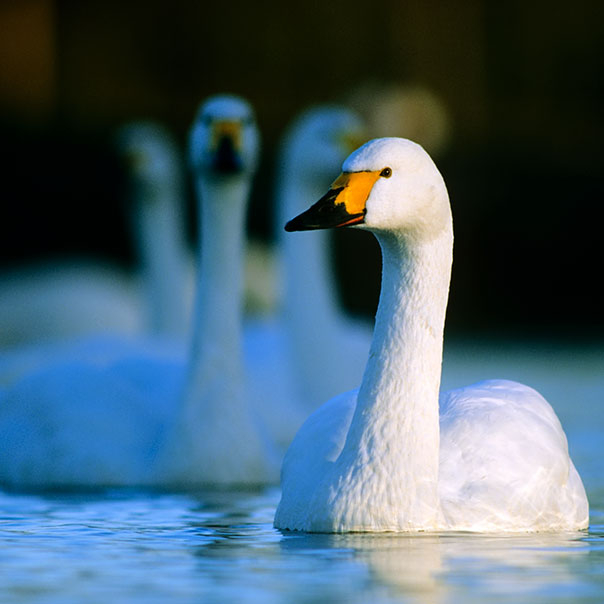 Get to know these big, beautiful birds and our work to help them. 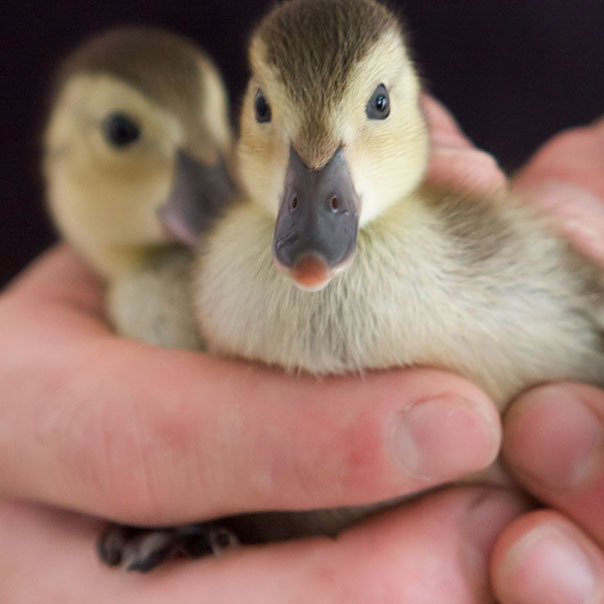 We’re restoring a wetland to give the world’s rarest duck a chance.