Although they might initially appear to be a group of modest-looking, speckled birds, wading birds are full of subtle beauty, clever adaptations and their own unique quirks.

The group commonly known as ‘waders’ in the UK (or shorebirds in the US) are typically long-legged wading birds that can often be seen half-submerged at shorelines, river mouths and estuaries.

It is a useful word as it captures a whole host of different species that exhibit this type of behaviour. Superficially, groups like rails, storks and herons might appear to be associated with this category, but those groups are big and diverse enough to be considered in their own right.

Where do waders live?

True wetland creatures, the wading bird can be found most commonly in its element, that amorphous zone between water and land. Whether they’re scuttling over the mudflats of an estuary or scraping out their vulnerable looking nests by the sea shore, you’ll usually find some waders in wetlands.

What do wading birds eat, and how are they adapted?

Usually aquatic organisms make up a large part of a wading bird’s diet, from worms hiding in the mud to molluscs and crustaceans hiding under rocks. All wading birds possess long legs that enable them to stay clear of the water while they look for food.

What waders eat and how they do it is often one of the more fascinating things about each species - and the clue is in the beak. Most waders are specially adapted to finding a certain prey species just under the surface of a wetland. Waders with longer bills like curlew and snipe use them like chopsticks to scoop up worms deeper in the mud, whilst the shorter-beaked lapwings use theirs to catch aquatic insects just under or on the surface.

Identifying waders can be challenging, as many of them vary their plumage with the breeding season and are superficially similar in name and appearance. This guide will take you through some of the waders you might come across in our wetlands, and some of their more interesting characteristics - which should help you tell them apart. 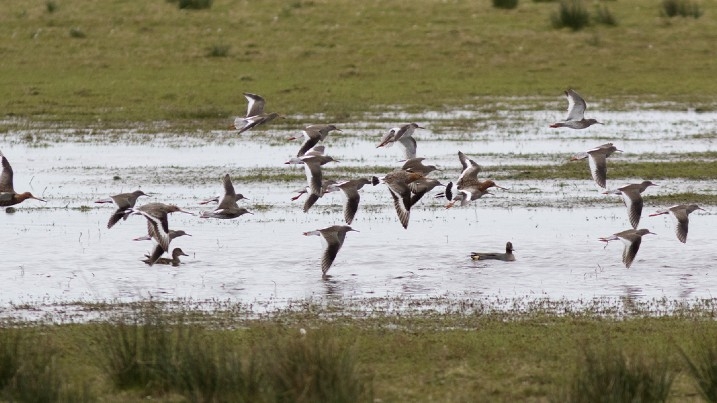 The oystercatcher and the avocet aren’t part of the same family but they are the only waders with purely black and white plumage all year round! 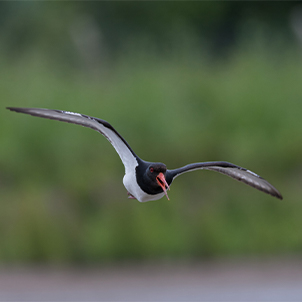 Oystercatcher (Haematopus ostralegus)
The bright red beak and eye of this wader make it easily identifiable. It likes to breed on quiet, undisturbed shores but is also seen prevalently on estuaries in flocks, hunting for the eponymous oysters. They have distinctive bars on the wings when flying, and in winter have white collars. 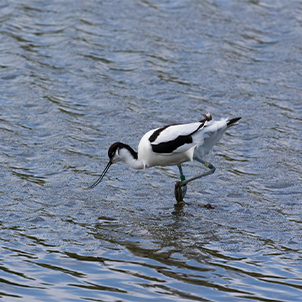 Avocet (Recurvirostra avosetta)
The avocet’s upwardly curved beak is unmistakable, adapted to help it swish sideways through the water to filter for its prey. It has long blue legs and white and black plumage. It’s mainly a southern species and can be found on estuaries in S and SW England, but avocets are currently doing very well on our reserves at WWT Washington in NE England.

The sandpipers you’re most likely to find in your local wetland are the green and common, with the wood and curlew sandpipers being more rarely seen. 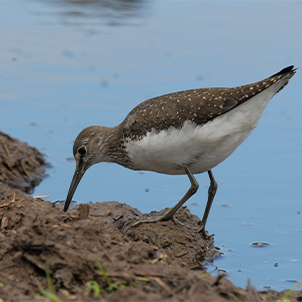 Green sandpiper (Tringa ochropus)
With a straight bill and yellowish-green legs, there is a sharp contrast between finely speckled upperparts and lowerparts (compared to the wood sandpiper which is more mottled/unclear). Prefers the water edges rather than open mud and doesn't bob much, compared to the common sandpiper. 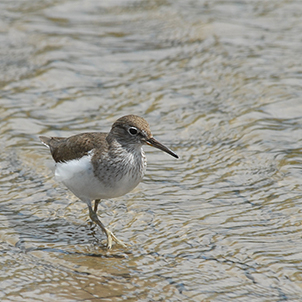 Common sandpiper (Actitis hypoleucos)
With a more dappled brown on its upper parts and elongated tail end, common sandpiper are known for their bobbing and strange, constantly teetering movements back and forth. These birds also have a distinctive flight - look out for stiff, curved wing position. 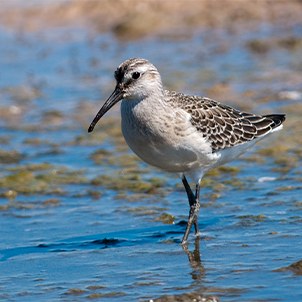 Curlew sandpiper (Calidris ferruginea)
A passage migrant, most usually seen passing through in small numbers during August and September on migration from Russian arctic breeding grounds to Africa. Looks similar to a dunlin with a markedly down-turned bill. 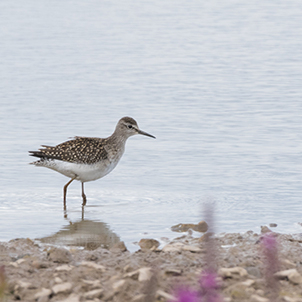 You might also spot a purple sandpiper, but these are very scarce visitors to wetlands. If you can see a purple sandpiper up close in spring, you might notice a beautiful purple sheen to its feathers. They are more of a coastal bird, most often seen on rocky outcrops throughout the winter around UK coastline. 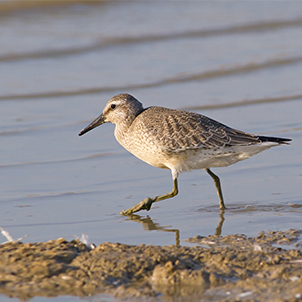 Knot (Calidris canutus)
Knots are dumpy birds that arrive in the UK in September from their Arctic breeding grounds. This small grey and white wader is a great sight to see when flying around in flock formation, their pale underwings flashing. They are noticeably found on the Washes in East Anglia and at WWT Welney. 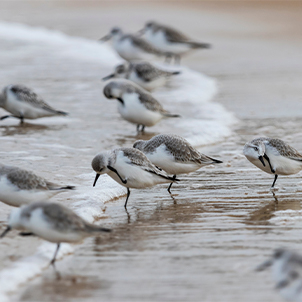 Sanderling (Calidris alba)
This bird loves the beach! The clue is in the name… this winter visitor and occasional autumn passage migrant has jet black wing edges and legs. It can be found dashing around sandy beaches, running a great speed along the edge of the breaking waves looking for crustaceans. 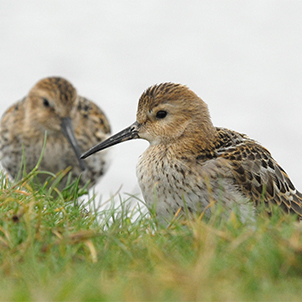 Dunlin (Calidris alpina)
Another great bird to watch in a flock during autumn and winter (especially from the wetlands at Steart), it’s a common sight on saltmarshes and mudflats. The bill is slightly down curved. 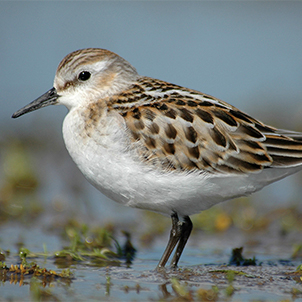 Little stint (Calidris minuta)
This tiny little wader is only around 13cm long, and looks like a small short-billed dunlin. It’s a passage migrant but autumn is a good time to spot juvenile birds, with their constant and frantic movements around freshwater pools. 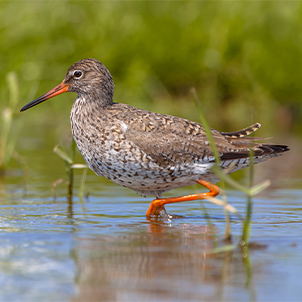 Redshank (Tringa totanus)
Redshanks are ground-nesting birds that have long red legs, red-based bills and white wing bars. They are nervous birds and utter loud, pipping alarm calls which can often be heard across our wetlands. They breed in the UK but are declining for similar reasons as the curlew. 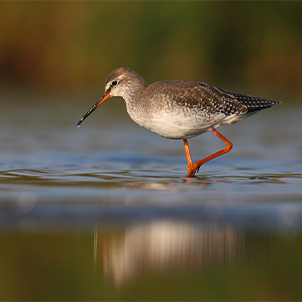 Spotted redshank (Tringa erythropus)
The spotted redshank is larger with longer legs and bill, without white wing bars. It calls ‘chew-it, chew-it!’ and can mainly be seen on passage in autumn but sometimes overwinters. 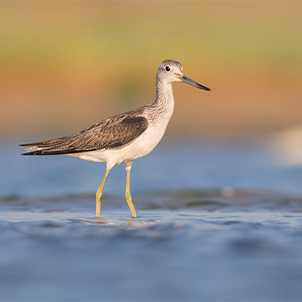 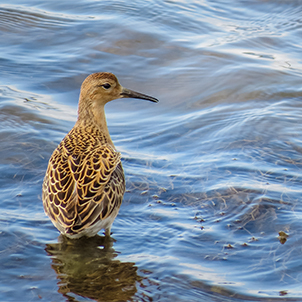 Ruff (Calidris pugnax)
Perhaps the hardest to identify of all the wading birds (especially in the UK as they don’t tend to breed here) and it’s extremely dimorphic in plumage! Look for a small head and sharp pointed beak. On breeding grounds, males develop a black, white or chestnut ‘ruff’ around their necks. Sometimes the feistier males develops plumes and facial warts, elaborate signifiers that are used in ‘lekking’ or showing off to the ladies.

The snipe and jack snipe look superficially similar but once studied closely, the subtle differences in detail start to stand out. 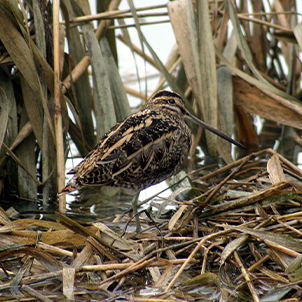 Snipe (Gallinago gallinago)
The snipe has the longest, straightest bill and roundest body. The way it feeds is a dead giveaway, moving with a ‘sewing machine’ type movement as it probes marshy ground. In the breeding season, it performs a ‘drumming’ display and creates a humming sound by vibrating its tail feathers! 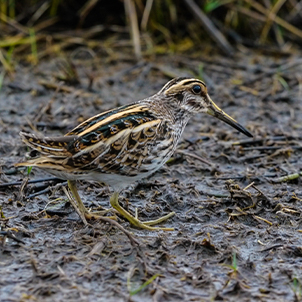 Jack snipe (Lymnocryptes minimus)
The jack snipe is altogether smaller and can only be seen in the winter months. It is difficult to observe, preferring to crouch motionless to avoid danger rather than fly. It pumps its body up and down as it walks.

The plovers aren’t all one family group, but they are some of the most beautiful waders you’re most likely to see in wetlands. 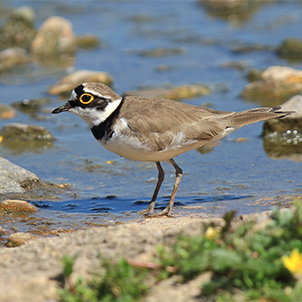 Little ringed plover (Charadrius dubius)
This tiny plover has successfully colonised inland man-made wetlands in England and can be further identified from the larger ringed plover by its signature golden eye ring. Arrives in early spring and leaves on migration in autumn back to Africa. 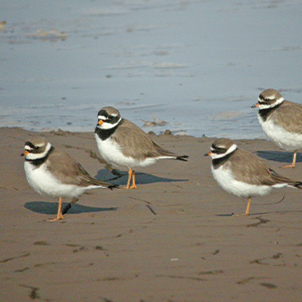 Ringed plover (Charadrius hiaticula)
Dumpy but larger than the little ringed, this wader is found along coastal wetlands all year round. It runs along beaches and mudflats like clockwork before stopping dead to feed. 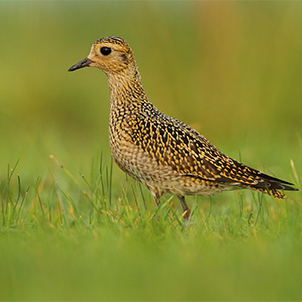 Golden plover (Pluvialis apricaria)
This intricately patterned bird is a sight to be seen as they fly in close formation, their sparkling wingbeats catching the sun and their haunting, flutey song rising up. Breeds in uplands and this is when the males have the best golden sheen. 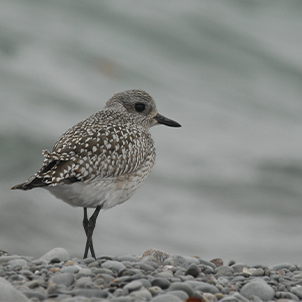 Grey plover (Pluvialis squatarola)
Found on UK coasts and estuaries in the winter, it resembles a golden plover but will very rarely be seen in breeding plumage because it nests in the high Arctic. Less of a flocking bird, more solitary. Their call sounds like a human wolf-whistle! 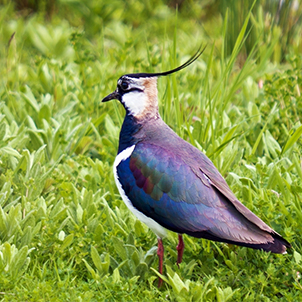 Lapwing (Vanellus vanellus)
These beautifully iridescent, crested plovers used to be numerous in Britain and Ireland but are now declining, due to changes in farming and loss of habitat. Their distinctive ‘pee-wit’ call can be heard as they fly in slow flapping motions over wetlands.

The below birds can be a little confusing with their larger body size, long bills and streaky plumages! 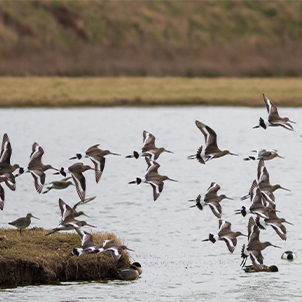 Black-tailed godwit (Limosa limosa)
These Near Threatened birds are a priority species for conservation in the UK. They have a long, straight bill with pinkish base, white wingbars in flight and black tail. Favours flooded meadows for breeding but struggles to find suitable habitat in the UK. In winter we receive more of this species from Iceland. More on our godwit work 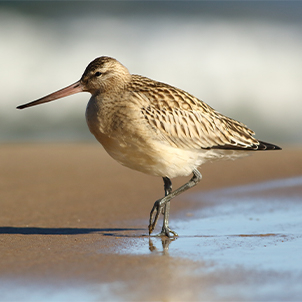 Bar-tailed godwit (Limosa lapponica)
The bar-tailed godwit has a slightly more squat appearance to the black-tailed godwit, with speckled back, noticeably upturned bill, completely dark wings and a noticeable striping of bars along the tail. They winter on estuaries and coastal marshlands in the UK. 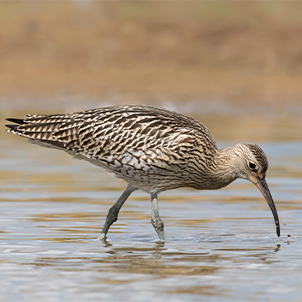 Curlew (Numenius arquata)
This long-legged wader has a distinctly down curved bill and pliable like an elephant’s trunk, called ‘rhinokinesis’. Mottled brown and grey, with long, bluish legs, they’re a serious conservation priority in the UK. The breeding population of this ground nesting bird has nose-dived in recent years. More on our curlew work 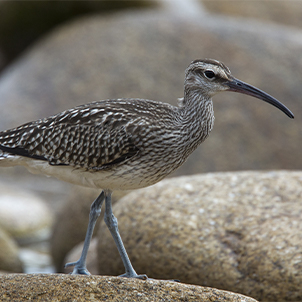 Whimbrel (Numenius phaeopus)
Whimbrels look like smaller curlews, with a stripy head pattern. But you don’t have to worry much about confusing whimbrels with curlew as they only breed on remote Scottish islands, although they are seen passing through the rest of Britain on coasts and estuaries.

In the UK, the two main threats to the wading bird population are the effects of climate change and human development on suitable habitat for nesting. Ground nesting waders like curlew, redshank and lapwing are incredibly vulnerable to predation or anything else that might disturb them - including farming practices and the increased rainfall linked to climate change. Rising sea levels (14cm already in the 20th century) is already predicted to increase the severity of storms, flooding and the loss of intertidal habitats.

Unfortunately, the pressure on farmers to increase the yield of their land has led to less available habitat for these birds, and at worst the unwitting destruction of nests and chicks. And the increase in generalist predators throughout the UK has meant that the productivity of ground-nesting waders simply can’t keep up with the mortality rate.

How WWT are helping

WWT are focusing our conservation efforts on helping the breeding curlew and godwit populations, which we hope will result in much needed insight that can be used to help protect other wetland species and their environments. We’re also creating networks of bigger, better connected healthy wetlands to bring habitat back to the landscape so wading birds can flourish. 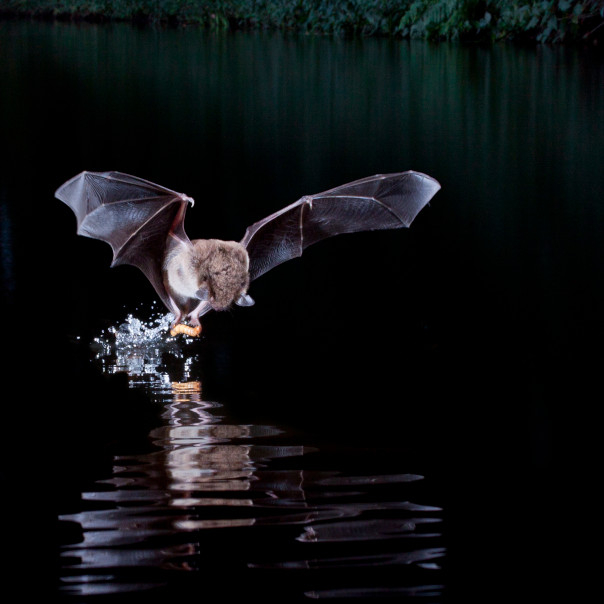 Complex, fascinating and mesmerising, bats are shrouded in darkness and mystery. 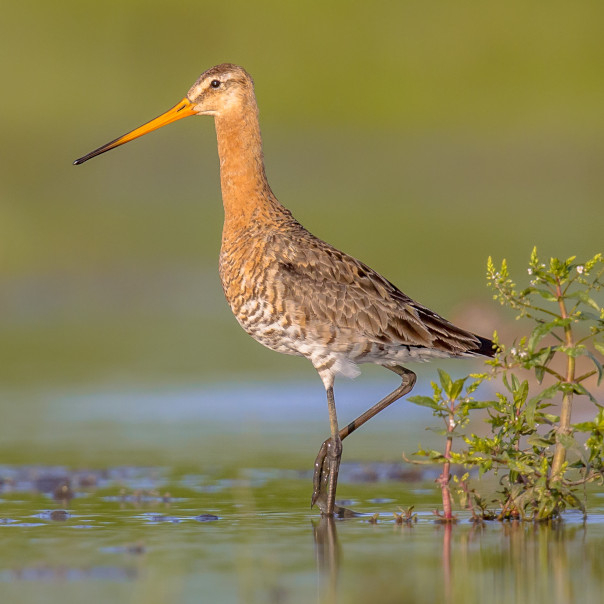 In the last 25 years, almost half of Europe’s black-tailed godwits have disappeared. 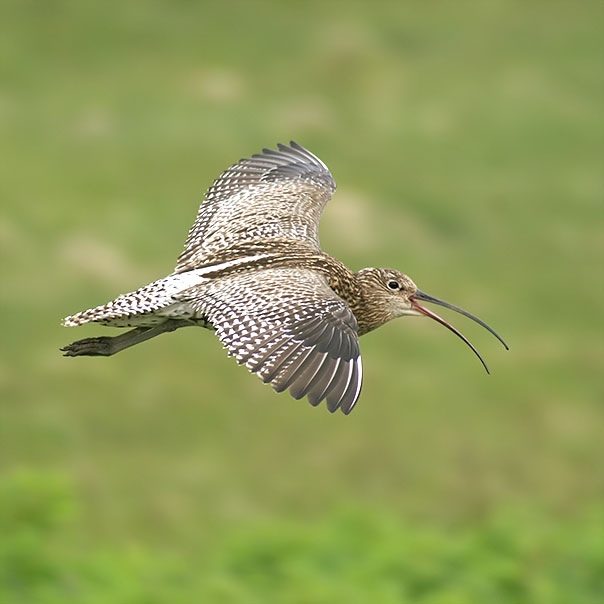 The curlew is the UK’s largest wading bird. Our plan to bring it back will also help many other species.