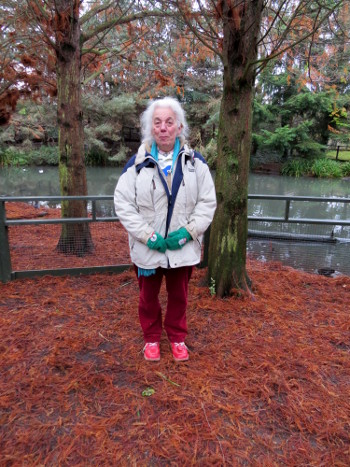 I decided to join after seeing a notice in the park. I used to walk through quite regularly as it’s really close to where I live and I used to take my mum there. I got involved because I needed something to do. I was caring for my mum and she passed away. I’d taken some time out for myself and this seemed like an opportunity to take my mind of things.

Since we’ve started, the volume of fly-tipping has gone down because they can see it’s being maintained now. We’ve taken a lot of stuff out of the water and I think the idea is that if it looks clean, it will encourage people not to blight it. Often children will pick up on what adults do and follow suit.

We have a lot of parks – proportionally we have a lot of park space which is totally underutilised. You don’t see people playing, and for me I just want people to use the parks just for the freedom of it and the luxury of it rather than it just go to waste. As a child, the pond and streams in Salthill itself, you could go pond dipping, collect sticklebacks, newts and water boatmen. We did a water survey a while ago and there is no longer the diversity in the water and children no longer do it. Apart from the fact that everyone says: ‘you can’t go down there, you’ll get wet or you’ll get muddy’ which is frustrating because it’s what kids should be doing. A lot of people don’t use the park because they say it’s a dangerous place.

If we are out there and people are working in the park to improve it and we show people it’s ok, it’ll encourage people. Even if they don’t get involved in the project themselves, they won’t think of it as a dead, vacant space that nobody cares about.

To be physically involved in the project, makes you notice the little things. The other day I said to another volunteer: ‘I haven’t seen that egret for ages’ and just by sheer chance, he spotted it. Before this project, I wouldn’t have had anyone to say this to nor would I have noticed its patterns. Then you start wondering about where it’s nesting etc. It gives you that extra connection. You start to pick up knowledge.

In Slough, which is a town, there is still quite a lot of diverse wildlife. But there used to be more and it would be great to get it back. People think of Slough as being very urban but we do have the park space. They are not pokey parks – they are very big. We take for granted what we’ve got. We were lucky that the Victorian business men of the day, who made their money, bequeathed us the parks. I think we’re a good example because we are really a very small group. Most of our work is carried out on one Saturday a month and we have achieved a lot. The amount of work we’ve carried out is amazing. You don’t have to give up masses of your time to make a significant difference.