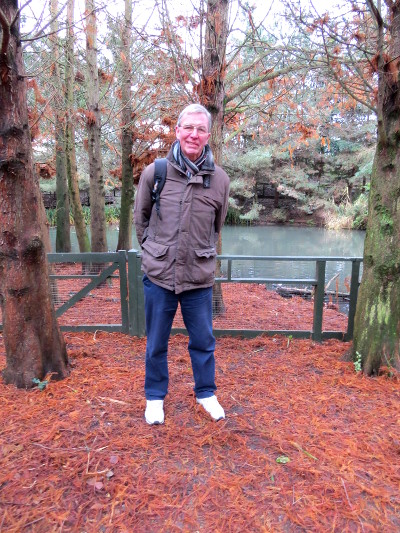 I first got involved after noticing a poster on the park railings. I’d been retired for six months and I’d always told myself I wasn’t going to start volunteering for anything until I’d had half a year to myself. Six months and one day later, I saw the poster. I also saw a kingfisher that day and took that as a sign.

I’ve always been interested in wildlife and nature. I’ve been a member of the WWT and RSPB for more than 20 years. The opportunity of getting involved in any conservation work right on my doorstep was just like a great big open door. It’s just the sort of thing I really wanted to do, to contribute in some small way. I just love the idea of making anything natural more wildlife and people friendly.

It would be so easy to get depressed when you look at what’s happening internationally and knowing how the environment is suffering so badly. Yes, you can make your financial contributions to organisations that can help relieve the problems internationally but if you can get up off your backside and do something little locally, that’s rewarding in itself.

I find that whenever I’m walking through the park that it’s now become second nature to me that if there are beer cans or bottles thrown on the paths or around the park, I’ll pick them up and put them in the bin. Not that long ago I would have thought I was fighting a losing battle, but now I think that if there is anything I can do to slightly improve it for the next person who comes along, then I’m blooming well not fighting a losing battle. If you feel that you’re making a difference, albeit a small difference, in your own little corner, it’s its own reward.

I know how therapeutic greenspaces, flowing water, still water, in its broadest possible sense, I know how good it is for me. I want other people to know how good it is for them to have contact with a little bit of wildlife, a little bit of nature right on your doorstep. So many domestic gardens have been concreted over to accommodate extra cars and what not. Children notice birds, plants, flowers in their local wild spaces that they might never see otherwise.

I was born in Somerset but I’ve been in Slough since 1990 so I’ve lived there for 27 years. It’s a little project that is set up in a big place like Slough with 20 loosely connected volunteers. It would be lovely to think that something similar could happen in other towns the same size or smaller.