Tree-mendous rain garden that mimics the Canadian wilderness is unveiled

A stunning new garden, which pays tribute to the Canadian outdoors and picked up a Gold medal at the 2017 RHS Chelsea Flower Show, has opened at WWT Martin Mere Wetland Centre in Burscough.

The feature, which was funded by the Royal Bank of Canada, will give visitors to the centre a flavour of the North American wilds.

As Canada celebrates its 150th anniversary, the people of Lancashire will be able to immerse themselves in the garden, which draws inspiration from the vast and ecologically vital boreal forest and freshwater lakes.

“The garden has been relocated within Martin Mere’s new Wooded Wetlands development which opened in August 2016. Wooded Wetlands showcases species and habitat found in the boreal and we were thrilled to receive the opportunity to give visitors a taste of the great Canadian wilderness right here in Lancashire. It really is an awe inspiring garden and is going to be very popular with our visitors– we are very grateful to Royal Bank of Canada for continuing their longstanding support of WWT’s wetland conservation through their Blue Water Project”.

The world’s largest land-based biome and one of the planet’s largest sources of unfrozen fresh water, the boreal is a huge area of forested natural habitat. It stretches across the far northern latitudes, from Siberia to Scandinavia and right across Canada, where a third of the entire biome is found. As well as providing a diverse habitat for thousands of species of flora and fauna, the boreal also plays an important global role in the reduction of carbon dioxide.

“This year’s Royal Bank of Canada Garden celebrates our Canadian heritage and once again reinforces our longstanding commitment to water preservation. Congratulations to Charlotte and the team at Wildfowl & Wetlands Trust who were able to recreate the Garden so quickly, providing an inspiring space for visitors for years to come.” 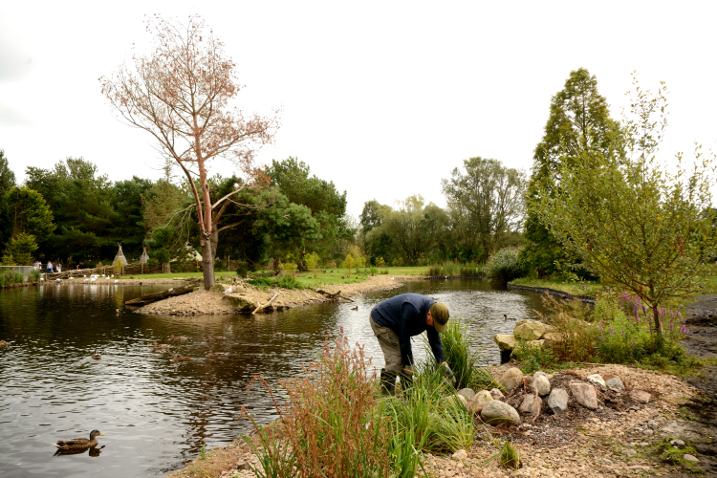 The Wooded Wetlands development opened at WWT Martin Mere in August 2016 after a six-month construction stage. The new attraction was a complete redevelopment of the North American area of the waterfowl gardens and features waterfowl species found in the boreal zone.

The swamps and forests in North America form a continuous ring of wetland wilderness around the entire globe. They form the world’s largest biome and are the destination of choice for many breeding waterbirds. It’s experienced the biggest temperature change in the world over the last two decades and faces many threats. This new development highlights the threats and species that inhabit biome.

The garden includes a waterfall pen which is home to buffleheads, a diving seas duck; a boardwalk through central pens accessible via a log cabin to see species such as trumpeter swan and Carolinas; the central lake that has canvasbacks on it and a tepee encampment demonstrating how indigenous people lived sustainably in wetlands. The attraction was partly funded by the Players of the People’s Postcode Lottery.