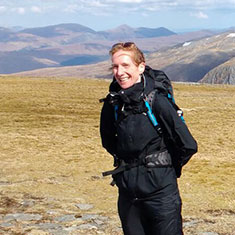 After graduating with a BSc in Zoology, I volunteered at WWT Martin Mere, helping out with day-to-day jobs in the grounds (building fences, digging holes), as well as a little in the visitor centre. However, my aspiration, at the time, was to work in conservation research; so, still as a volunteer, I started helping with WWT’s various swan projects – collating and entering data, and reporting on results. It was through this that I ended up moving south to join the team at WWT Slimbridge.

The vast majority of my role from then on was linked to waterbird surveys. I assisted with the running of the Wetland Bird Survey, then the Goose & Swan Monitoring Programme, which for the last few years of WWT running the project, I was Project Manager. I carried out a range of habitat and species specific surveys, including aerial surveys of Barnacle Geese, Common Scoter breeding surveys and various goose and swan surveys. I was also heavily involved in the planning, fieldwork and reporting of aerial surveys of waterbirds in UK inshore and offshore waters, which WWT helped to advance.

After over 20 years of working at WWT, I still enjoy working in the conservation world and now, even more so, I realise I enjoy encouraging and helping others to get involved too.

My role will include helping to co-ordinate the development of Conservation Evidence projects and our input into other WWT projects, managing a few small projects, developing and managing systems to facilitate efficient and productive research, leading various groups, including to help co-ordinate our citizen science and capacity building work, and generally, putting my organisational skills to work where needed.

And although my new role is potentially a bit more administrative than before, I still hope to get out in to the field now and again.

Cranswick, P.A., & Hall, C. 2020. Eradication of the Ruddy Duck Oxyura jamaicensis in the Western Palaearctic: a review of progress and a revised Action Plan for 2021–2025. WWT report to the Bern Convention.