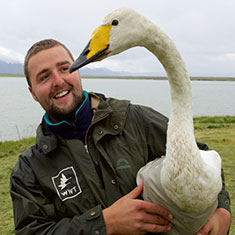 I have always had an interest in birds, especially wildfowl and from an early age, I always knew the line of career that I wanted to take. With an interest in wildfowl, where better to pursue a career in conservation than at the Wildfowl & Wetlands Trust, so at the earliest possible opportunity, as a 13-year-old, I signed up as a volunteer in 2003. Initially I helped on the long-term Whooper Swan study at WWT Martin Mere, before moving to WWT Caerlaverock were I helped with the long-term Svalbard Barnacle Goose study. I joined WWT’s Conservation Evidence Department, in 2011 at Slimbridge where I’m currently based.

I have worked on a range of waterbird conservation projects, with a focus on bird ringing and monitoring. I have been part of international expeditions to Bulgaria to work on Red-breasted Geese and to China to work on Spoon-billed Sandpipers. I have also led expeditions to Arctic Russia to monitor Bewick’s Swans.

I assist with the delivery of the UK’s Goose & Swan Monitoring Programme (GSMP) mainly leading on the coordination of the Icelandic-breeding Goose Census (IGC) and the International Swan Census (ISC) along with helping to assess the breeding productivity of the UK’s native migratory goose and swan species. My work in the Conservation Evidence Department also comprises of overseeing WWT’s waterbird capture and marking work, assisting with fieldwork (particularly waterbird ringing and counts), processing and analysing data, and providing support to WWT’s Reserve Management team on monitoring protocols. I have also contributed to a number of capacity building training courses in monitoring techniques, primarily in the Middle East.