Mangroves are not just any sort of tree. They are sometimes called the 'roots of the sea' because they live in coastal wetlands with their roots submerged in the water, against the rush and pull of the tide, thriving in hot, salty, muddy environments that would quickly kill other fauna.

Mangrove trees form vast areas of habitat known as mangrove swamps. As well as being essential for a variety of marine and terrestrial wildlife, they’re key weapons in the fight against climate change: known as ‘blue carbon’ stores, they hold vast quantities of carbon. Despite this, mangroves are one of the world’s most threatened tropical wetland ecosystems.

Mangroves are woody trees or shrubs that live along sheltered shores, rivers and estuaries of 118 tropical and subtropical countries around the world. Exceptionally tough, they are the only species of tree in the world that can tolerate salt water.

The secret to their survival is a clever filtration system that keeps out much of the salt and a twisty root network that holds the mangrove upright in the shifting sediments where land and water meet.

It’s estimated that there are at least 50 types of mangrove around the world. Although they are not all closely related to one another, all trees classed as ‘mangrove’ share a thirst for salty, oxygen-poor environments. 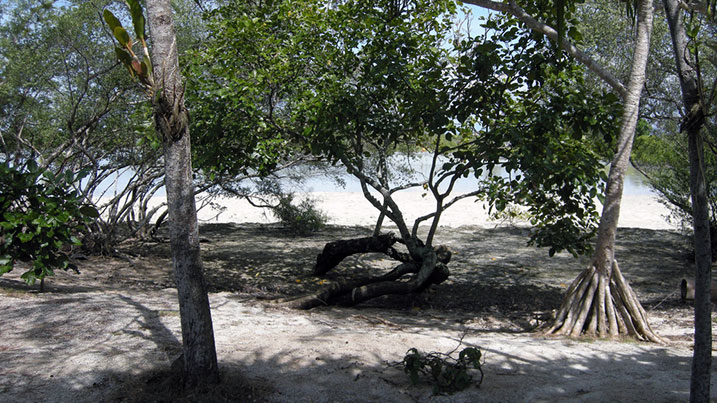 The ecological importance of mangroves

Mangrove forests may lack the majesty of their terrestrial cousins but they’re extremely important ecologically, benefiting wildlife, mankind and the planet.

They help keep people safe Mangroves are a thick, impenetrable, natural buffers between sea and land. They are interlinked with coral reef and seagrass ecosystems, protecting coastal communities from the impact of erosion and extreme weather.

They support a diverse range of species Mangrove roots provide a safe nursery for thousands of coral reef species and commercially important fish. Not to mention the birds and the terrestrial wildlife that make their home amongst mangrove forests.

They help keep the oceans stable Dense roots system of mangrove trees trap sediment that flows down rivers and off the land. By filtering out these elements, mangrove forests protect fragile coral reefs and aquatic seagrass meadows from being smothered.

What kind of animals live in mangroves?

Osprey overwinter in the wet mangroves of Gambia, Mauritania and Senegal. Hundreds more varieties of bird also nest, breed and feed in mangrove forests. The roots of mangrove swamps teem with life, too: fish, crab, and shrimp live in the clear waters (providing an es sential source of food for thousands of coastal communities around the world). And sticking onto the roots themselves are barnacles, oysters, sponges, anemones, and sea stars.

Mangroves and other related wetlands like coral reefs and seagrasses are declining at a worrying rate, according to a recent UN report on biodiversity, despite their critical importance - more than 45 countries have specifically mentioned mangroves in their plans to tackle climate change as of 2019. Yet many are cleared to make room for human settlement or infrastructure, are harvested for firewood or construction materials, or removed to enable agricultural use.

Shrimp farming, in particular, is one of the biggest threats to mangroves. They are often viewed as ‘worthless’ and cut down to make room for temporary shrimp pools. Once the pools have gone, the toxic water that remains, containing shrimp feed, pesticides, chemicals, and antibiotics, is released back into the environment where it can harm the local ecosystems.

WWT is one of the world’s leading science and conservation institutions in its field. We’re acting to create, protect and restore wetlands for the wildlife and people both in the UK and around the globe.

Find out more about why we're working for wetlands