WWT’s Director of Conservation, James Robinson, reflects on what has been achieved at COP26, and what still needs to be done.

It was very special to be at WWT Slimbridge to celebrate our 75th anniversary this week, especially after I had spent a successful, if exhausting, week in Glasgow at COP26 promoting the power of nature-rich wetlands in the fight against climate change. It’s good to know that after all these years, WWT continues to be a voice for conservation and the environment on the global stage.

The COP26 summit brought countries together to speed up the action needed to achieve the goals of the Paris Agreement and the UN Framework Convention on Climate Change. There’s a lot at stake in Glasgow and people from across the world are watching intently to see what is decided at the summit. We know that we mustn’t let the climate warm beyond 1.5 °C above pre-industrial levels. It’s also clear that there are going to have to be significant changes to the way we live our lives if we are going to stop the most serious impacts of a changing climate.

Our goal was to illuminate to the world how nature, and wetlands, can help us in the race to net zero emissions if we choose to harness its benefits.

Wetlands featured in the discussions and debates at COP26, with the main focus around peatlands and coastal wetlands. 'Blue carbon', the carbon accumulated and stored by saltmarshes, seagrass and mangroves, was being promoted by WWT and other organisations from across the globe.

New research shakes up the room

At our WWT nature reserve at Steart Marshes, important new research from Manchester Metropolitan University and Jacobs has found that this 250 Ha area of saltmarsh stores as much carbon over four years as just over one million new trees grown for ten years. The site, created through managed realignment funded by the Environment Agency and delivered by WWT, is burying organic carbon at a rate of over 19 tonnes per hectare per year, storing a total of over 18,000 tonnes of carbon (67,000 tonnes of carbon dioxide) at the site over the four-year study period.

To put that into context, it is equivalent to taking 32,900 UK cars off the road for one year and the greenhouse gas emissions from powering almost 78,000 UK homes for one year. The Steart site is also full of wildlife, supporting large numbers of wintering waterbirds such as golden plovers and black-tailed godwits, giving them a new home as sea level rises.

This new research and its promotion in the media created a real buzz at the conference and I was approached by lots of people who wanted to help us scale up coastal wetland creation at scale, and identify funds that could make it happen.

Consideration for blue carbon – but no commitment yet

We need to create and restore more of these coastal wetland super-habitats for the multiple benefits they provide for people and wildlife. On 6 November, ‘Nature and Land Use Day’ at COP26, we heard that the UK Government had made some new pledges and cautiously welcomed the announcement that they are considering adding ‘blue carbon’ habitats in the UK Greenhouse Gas Inventory (which contains greenhouse gas emission estimates and savings). We need this to happen very quickly. We also need to see these habitats included in the UK’s Nationally Determined Contributions, which sets goals for reducing emissions and should drive the creation of more habitat whilst securing the future of that which already exists. We will now keep the pressure on the UK Government and the devolved administrations to get on with this.

Peaceful protest has a place

I ended my time in Glasgow by joining the Global Day of Action for Climate Justice march through the city with other people who care deeply about the future of the planet and want action to stop the climate crisis now. I was struck by the anger of those who were demonstrating and I was pleased that WWT was adding its support to those who could not make their voice heard in the conference centre. So many of those most affected by the climate crisis were least represented at the negotiating table, including those representing the global south and indigenous populations, and WWT will continue to work in partnership with communities around the world who urgently need support to protect their wetlands.

Since I returned to Gloucestershire, I have been asked whether I have hope for the future as the pledges made by the countries involved still take us way beyond 1.5 °C limit. My answer is that we must keep fighting for the change we need to see and not lose hope. The passion of the young people I met who are creating so much pressure for change coupled with the ideas and solutions being offered by those in the conference, including those being promoted by WWT, give me personal hope that the future can be better.

If you want to add your voice to our call for wetland solutions to meet the climate and nature crises, please add your name to our Wetlands Can! pledge. 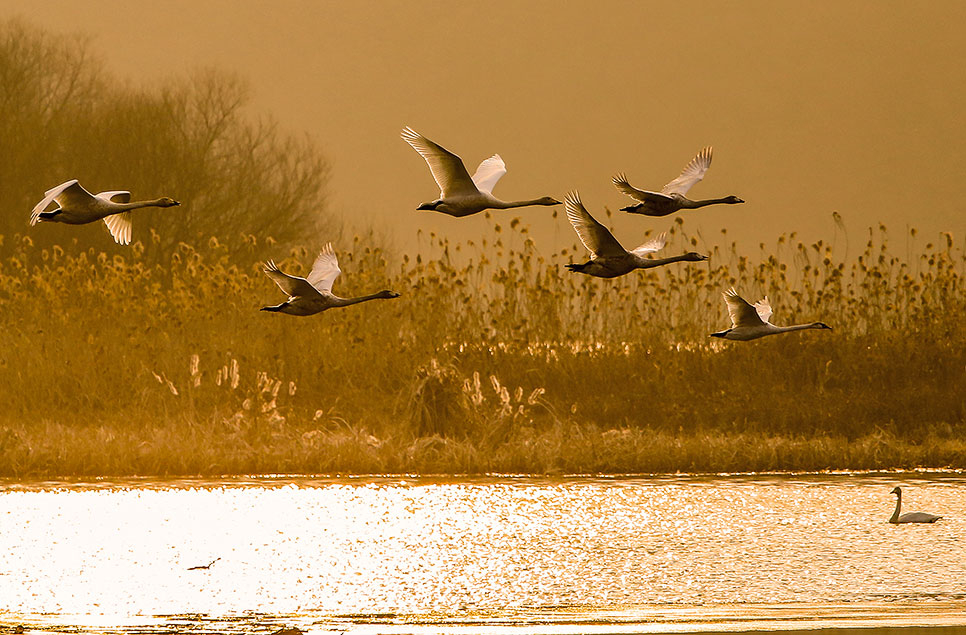