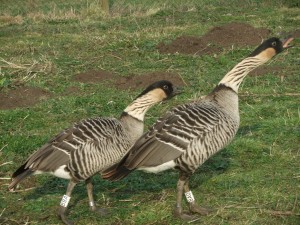 Apologies all for posting silence but I have had to take some time out from working on site.

I can however inform you that the Nene are beginning to settle down to breed at an alarming rate of knots! Some of our oldest and most dedicated pairs are making their regular pilgrimages to their favourite breeding sites, and some are just starting out on a whole new adventure...

As of the 18th of the month I am informed that no fewer than 10 pairs have already settled down to lay eggs. These include BAV and BAS, BBC and BBH, AVS and BAF, BBX and BAP, BCV and BEP, BBT and BCB, and the list goes on and on... A favourite pair (above) of mine; BAD and BBA (certainly not living up to his BAD reputation) have wandered too far a-field this year... Normally settling down in the crook of the fence outside the Tropical house, this relatively young pair have found themselves in the depths of the long grounds beyond canoe safari. Whilst physically stunning, these two have never had the best of luck... In 2009 BAD walked into a piece of bamboo and cut his eyelid prompting some mid-incubation eye bathing to which he did not take kindly... In 2010 BBA got some juncus in her eye and subsequently has developed a cataract from the trauma. In 2011 the snow was so great that the bamboo sheltering their nest almost flattened to the floor covering BBA and her nest in a virtual mountain of snow!! Despite this, 2011 was finally their year and they reared a sweet little clutch of 3, a mixture of their eggs and an older female. Maybe with this "new start" in the outback of the centre, they might finally make it on their own!

BBZ and BAX (below) are our most fertile and productive pair, who always and without fail breed every year beneath the lonicera bush in the African exhibit. During our current reconstuction of the pen, the intrepid pair have been patrolling the red tape and temporary fencing in search of entry. For a while BAX seemed so heavy with eggs that she might be in danger, but just at the crucial moment; success. They needed only a slight gust of wind to get the fence low enough, and boy did they take advantage! They were found with a lovely tidy nest and 2 eggs around 1 week ago. Having hatched 4 out of 4 for 3 years, I really wish them the best of luck. 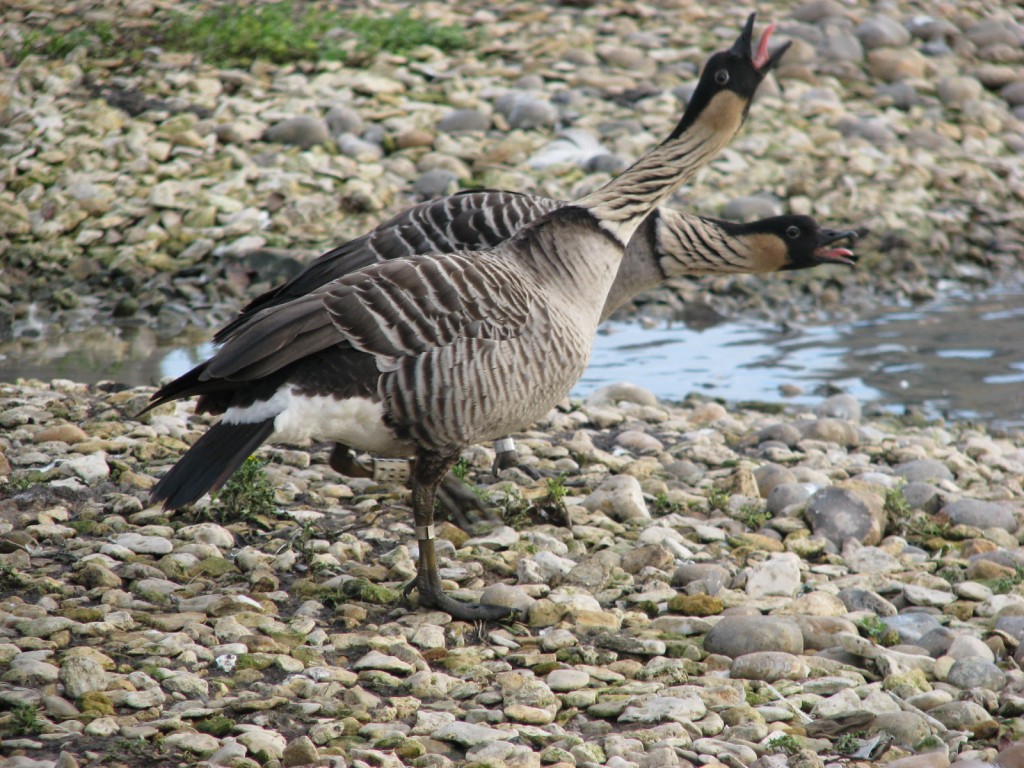 Our Nene (and the majority of Slimbridge hatched birds) can be sexually identified by their metal ring banding. As on BBZ above you can clearly see his ring is rung onto his right leg to confirm him as a male. BAX has her metal ring on her left leg; "left for a lady."

All our pairs are disappearing into the undergrowth to undergo their 28 day incubation. A female can lose up to a third of her entire body weight during an incubation period, but in ordinary circumstances can withstand the duration of incubation with no trouble at all. IF, in the future weeks a skinny Nene with a ring on the left and a tummy devoid of feathers and down literally charges at you from within a bush; I ask of you, please offer to feed her!