The wetlands protecting Cambodia in times of crisis

We’ve always known wetlands play an important role in many countries in the world, providing food, water and income for the most vulnerable. In times of hardship such as war, pandemics or extreme weather, the longer-term benefits of protecting our natural resources become particularly apparent.

Across South East Asia, as the coronavirus hit, millions of migrant workers fled the cities where they had moved to find work, back to the countryside to seek refuge with their families. As factories closed down and jobs dried up, curfews were introduced and fears over food shortages loomed, this mass exodus to the countryside to live off the land offered for many, their best chance of staying resilient throughout the pandemic.

Mr. Kang Torng on how his local wetlands of Boeung Prek Lapouv have helped the communities: Watch the video

Cambodia was no different. Ang Moeun is Community Chief in Prey Kla, a village in Boeung Prek Lapouv, one of the areas where WWT works and one of the largest remnants of seasonally inundated wet grasslands in the Lower Mekong. He explains what happened:

"After the outbreak of COVID-19, many people from Boeung Prek Lapouv who used to work in garment factories had to return home because their work schedule was impacted. Now many of them go to the wetland to get their food and collect necessary things."

And in a picture that’s been played out across the world, it was the poorest and most vulnerable who were the hardest hit by the virus, as Saber Masoomi WWT’s office manager in Cambodia explains:

"Many of them suffered because they either lost jobs or their jobs and payments were shrunk. They had to return to their villages to be able to survive. And as they weren’t able to cultivate anything before the outbreak, they had to rely on the bounty of the wetlands for survival."

Water lily, lotus, mushrooms and other vegetables plus rats, frogs, snails and fish. These are just some of the things that people have been collecting from their local wetlands in order to help feed their families.

30% of Cambodia is wetland and with 46% of Cambodia’s population working on these seasonally flooded lands, these wetlands haven’t just been important for returning migrants. They’ve also provided a lifeline for the people that live there. Especially when local lockdowns meant they could no longer get to local markets to buy food. Kang Torng is the leader of the Sarus Crane Rice Community.

“With the outbreak of the coronavirus we have limited access to the markets outside of the community. People are trying to protect themselves from the virus, so we now depend more on the resources from the wetlands for our food."

The wetlands have always provided grazing for buffalos and cows, but with markets closed and people no longer able to buy supplementary feed for their livestock, they have become more important than ever, as Ang Moeun explains:

"Many people also collect grass for the animals from the wetlands, as they cannot go to the market because of the Coronavirus outbreak."

In just 15 years, half of Cambodia's precious wetlands have disappeared

But these wetlands that provide food and other fundamental resources for so many people in Cambodia are vanishing at an alarming rate. In just 15 years, half have disappeared. The threats are many and varied. Expanding irrigation projects to facilitate rice growing, pollution from pesticides and fertilizers, unsustainable agricultural techniques and climate change are all having an impact.

The region’s fragile river systems are also severely threatened by the growing need for energy in the region and the development of hydroelectric dams. These have caused ecosystem collapse and biodiversity loss, devastating freshwater species and the communities that rely on the rivers to live. The dams also hinder movements of migratory fish up and down the river, reduce the levels of sediments and nutrients that are the building blocks of the delta’s productivity. Combined with the effects of excessive water usage for agriculture and more frequent drought, people are starting to notice a worrying change in the wetlands that have always been a constant in their lives.

"Our wetland is drier now and the chestnut and other grasses don’t grow, making it difficult to provide food for our buffalos and cows. This year is more difficult. I can’t collect food and mushrooms for my family from the wetlands. Last year it was wetter and the wetland provided us with many foods."

Cambodia is one of the countries in the world most dependent on nature for the livelihoods of its people, especially the most vulnerable. We’re working with the locals to help them protect wetlands like Anlung Pring for future generations.

Over the past ten years, WWT has been working with local partners to develop projects that encourage more sustainable management of local resources, for example by planting crops that use less water and don’t need pesticides. Our ecotourism centre at Anlung Pring Protected Landscape, attracts hundreds of tourists who enjoy the scenic wetlands and wildife, generating income for local people and wetland conservation.

The recent pandemic has shown that this work is more important now than ever before, as Tomos Avent, WWT’s Head of International Programmes explains:

"We aim to enable local people to benefit from the conservation of wetlands through livelihood support, like the employment and infrastructure improvements paid for by profits the from our ecotourism project. Thanks to your support, we’ll enable more communities to secure a brighter future for themselves, their local environment and its precious biodiversity." 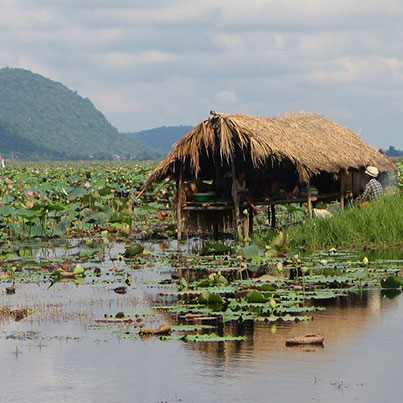 A wonderland of wetlands

One of the world’s most wetland-dependent countries, Cambodia is a land of stunning contrasts. But large areas of wetland are being destroyed to support Cambodia’s fast-growing economy. By working with local communities, we can help ensure Cambodia's wetlands are here for future generations.