Here’s the latest snapshot of just some of the wetland conservation work that’s been possible in the last few months due to your support for WWT.

In Madagascar, where we’ve reared and released 21 Madagascan pochards, we’re delighted that two broods (of eight and four ducklings) have hatched on Lake Sofia (as pictured above). Their release and subsequent breeding, is the result of extensive work that we have done with local communities to improve the ecological health of the lake.

The Madagascan pochard is the world’s rarest duck, and they normally first breed at two years old. We thought that their first breeding season might be delayed (and likely to fail) due to the fact that the released birds were hand-reared and the lake was in poor condition. These ducklings are the invaluable opportunity to understand the ecology and needs of both duck and lake. After ten years, this is the final major milestone for the ducks, and has been achieved between 1-3 years ahead of schedule.

In Cambodia, we have secured funds to lease a section of farmland that flows into our Anlung Pring Protected Landscape. The leased land will be used as a demonstration site of sustainable farming, with some of the rice produced left on the land for the cranes to feed on. We hope that this will make up for food shortages that we have always had at the site at the time of year of harvesting.

In China, in partnership with WWF and Beijing Forestry University’s Centre for East Asian-Australasian Flyway Studies (CEAAF), we are supporting a coordinated census of wintering waterbirds in the Yangtze floodplain. This is the first such census since 2015 and will provide the first significant opportunity to assess the population trend for a number of widespread waterbirds, which will help in informing and supporting the East Asian Australasian Flyway conservation status review due in 2021.

In Russia, our Swan Champions Project uses the commitment and knowledge of local communities in the Bewick’s summer breeding grounds in the Nenets Autonomous Okrug region in arctic Russia to protect the endangered Bewick’s swan from illegal hunting. A successful first year saw 3000 guides and posters on how to identify Bewick’s from other swans being distributed to local hunters ahead of the spring hunting season. An exhibition has been produced which has visited local schools, young swan ambassadors have been enlisted and the exhibition will tour remote communities in February. 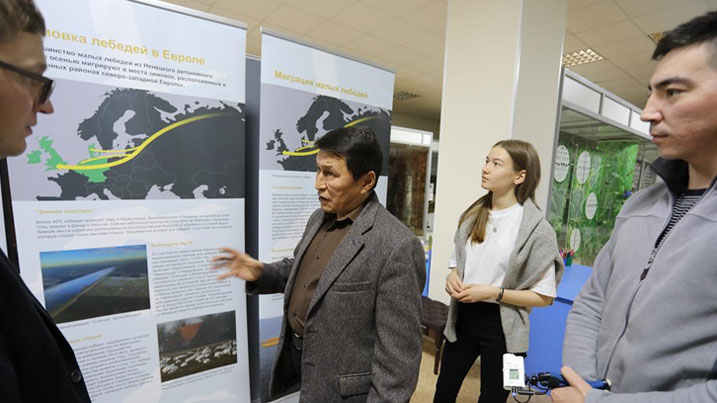 In western Africa, we’re working with partners at wetland sites along the East Atlantic Flyway to provide binoculars and telescopes to support community engagement and education work, as well as for those carrying out bird survey work. Working through WWT’s Wetland Link International network (WLI) we have set-up Optics for Africa to provide used optics, which we check and repair before sending them out for use in delivering these conservation projects across Africa. Any good quality binoculars, scopes or other accessories that are no longer used can be donated at any WWT centre, where they will get a new life supporting wetland conservation overseas!

Elsewhere in western Africa, there were significant sightings of wintering birds ringed by Project Godwit in October and November. A wild-reared adult was seen in Mauritania, and three headstarted juveniles were seen in Senegal, adding significantly to our knowledge of the migratory route and wintering sites of the UK population. Local engagement work has continued, focusing on schools, developing links with local groups and representing the project at local events.

Across southern England, plans to partner in curlew recovery projects are gathering pace, with successful meetings held on Dartmoor and East Anglia. The Dartmoor project, a partnership with the Duchy of Cornwall, Dartmoor National Park and RSPB looks very encouraging, as does the East Anglian project with Natural England and Pensthorpe Conservation Trust. Both projects involve elements of habitat restoration, predator control and exclusion, and headstarting.

We have also provided input to national curlew planning at the UK and Ireland Curlew Action Group meeting in Edinburgh, and WWT Slimbridge has hosted groups from Ireland who are interested in headstarting curlews over there. In partnership with the newly formed ‘Curlew Action’ charity (run by Mary Colwell), we are producing a toolkit for lowland curlew fieldworkers.

In west Somerset, the Two Valleys Natural Flood Management (NFM) programme had an extremely successful community workshop in October. The event provided an opportunity to share recent progress, link up with other nearby initiatives, and importantly, to bring the communities together and begin to develop a plan of action for how to ensure a sustainable legacy for the programme when the current Environment Agency funded pilot ends in 2021. Although issues with planning permission has affected some work, the creation of NFM features is progressing relatively well, with work completed at one farm and contracts in place with the Farming & Wildlife Advisory Group Southwest for work to improve drainage management at two further farms.

In Slough, despite complications due to unmapped underground services, work is nearing completion on the “daylighting” of the Salt Hill Stream and wetland creation in Salt Hill Park. Once complete, we will be running engagement activities, including community planting events, in 2020.

In Bridgwater, Somerset, we were successful in our bid, allied to the planned tidal barrier, to develop a package of initiatives that maintain and enhance Bridgwater’s connection with its natural and cultural water-based heritage. The opportunity to secure funding to scope a comprehensive programme of work in a major urban area is extremely rare, and we are hopeful that it could lead to Bridgwater becoming a shining exemplar of integrating urban wetlands and blue infrastructure.

In the Severn vale, work to install new eel pumps and screens at Slimbridge Wetland Centre has progressed over the autumn. The European eel is classed as critically endangered, and we were delighted that, following eel pit-tagging in the summer, a number of tagged individuals have been recorded leaving the site en-route for their spawning grounds in the Sargasso sea, 3,000 miles across the Atlantic. 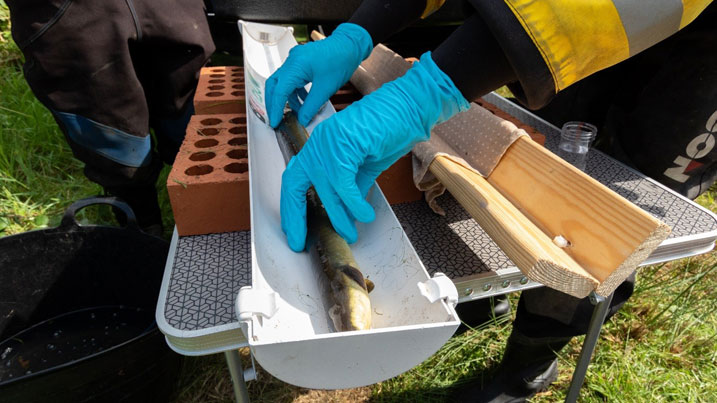 Elsewhere, our tender to develop technical guidance for Natural England on the use of integrated, constructed wetlands to improve water quality was successful, and means that we will enhance our position/reputation in this area, and lay the foundations for the much wider use of wetland solutions to tackle water quality issues in England. Although the primary audience for this work is Natural England and Environment Agency staff, we are already in conversation with the Rivers Trusts about dissemination of the guidance to ensure it reaches as wide an audience as possible.

At Martin Mere, as well as redeveloping the Asian Short-clawed otter exhibit, design work is underway for an exhibit exploring the cultural connection between wetland animals and people, a migration-themed exhibit, and re-locating the predator proof fencing through the centre of the living collection. This will create a more accessible area for visitors, blurring the boundary between the wild and captive visitor experience.

At Llanelli, as part of the Millennium Wetlands Enhancement Project, our livestock handling infrastructure was greatly improved, and habitat management work, including scrub control and sward lifting to loosen and improve soil structure and rooting was carried out. We also cleaned 400m of ditches, and created four new ponds to benefit amphibians.

At Steart Wetlands, architects plans have been developed to support fundraising for new volunteer and staff facilities, and community consultation is now being carried out to gauge local support for the project. We have also re-seeded 18 acres on Stockland Marshes and a 5km flood bank with a wildflower and grass meadow mix to greatly improve biodiversity, and produce a higher yield for the local farmer that manages these meadows. In turn, we will see more invertebrates, including pollinators, attracted to the site. 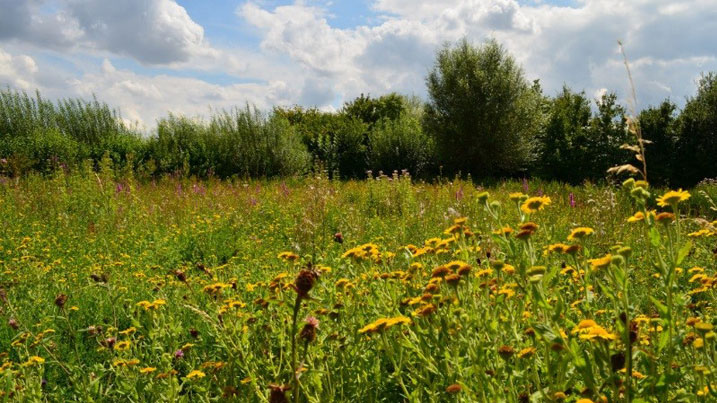 At Slimbridge, the National Heritage Lottery-funded Slimbridge 2020 is ongoing, major components of which have now been delivered, including a new, fully-accessible, three-story, open-top Estuary Tower, which was opened at a highly successful event in mid-November. The major new works still under construction include Mission Possible, an exhibit which showcases our conservation breeding work, telling the story of the pioneering work on Nene, the techniques we have developed, and how we are applying them today to help put lost species back into our wetland landscapes including Madagascar pochard.

Despite bad weather, works are progressing on schedule, and are due for completion May 2020. Another new exhibit, the Living Wetland Theatre, also due to open during the summer will provide an open air theatre which will focus on wetland conservation, and an aviary which will showcase UK wetlands and ambassador species. The final elements to complete the new habitats and wildlife safari route along the Summer Walkway will be complete in time for summer opening.

At Arundel, planning permission has been received for a major new aviary, featuring the underwater viewing of diving ducks. The project has been extended to include refurbishment of the adjacent exhibits, which require substantial de-silting and anti-erosion works. Removal of the existing birds, and draining down the area, has already started, in preparation for groundworks to start in January, with completion planned for summer 2020.