The call has come from organisations at a technical meeting of the Ramsar Convention, the intergovernmental treaty on wetlands.

More than a third of natural wetlands have been lost since 1970, according to figures published by Ramsar in the Global Wetland Outlook. Wetlands are being lost more than three times faster than forests.

Over the same period paddy fields, reservoirs and other artificial wetlands have nearly doubled in extent, but these man made wetlands provide relatively little benefit to wildlife and much less of the general benefits to people - such as cleaning water or preventing drought and flood.

Recent research demonstrated how natural coastal wetlands could even combat the effects of climate change.

The full text of the call for governments to back the restoration of natural wetlands is below. 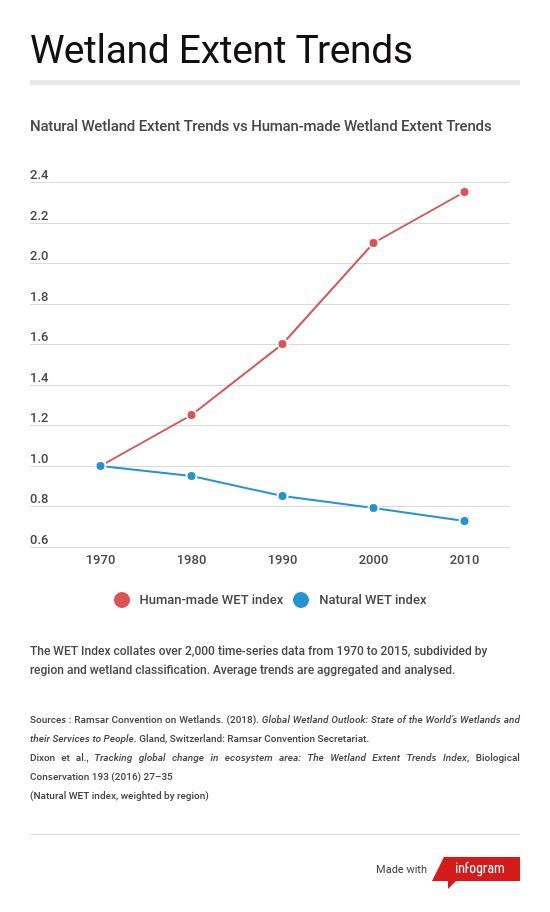 The environmental health of our wetlands across the world is deteriorating. The authoritative Global Wetland Outlook released by the Ramsar Convention on Wetlands in 2018 highlighted an alarming trend in wetland loss; at least 35% of the world’s natural wetlands have been lost since 1970.

This will have serious implications on our ability to store carbon and support broader climate adaptation. By restoring, conserving, and wisely using our wetlands we can contribute towards achieving the Sustainable Development Goals (SDGs).

Natural wetlands have declined across inland, coastal and marine habitats, with serious impacts on food security, fisheries and other wetland-dependent species, water provision for agriculture and domestic needs, and as natural protection from storms and floods. The economic and biodiversity value of wetlands far outweighs many terrestrial ecosystems – and yet they are disappearing faster than any other ecosystems. They provide society with huge value. By degrading and draining our wetlands, we lose much more than what lives there, we also lose the diverse benefits they provide to society.

The Ramsar Strategic Plan 2016–2024, adopted by the 168 Contracting Parties to the Ramsar Convention at their twelfth meeting in Uruguay includes targets for the restoration of wetlands, with biodiversity conservation. Given the important role that wetlands play in local and regional climate processes, including storing greenhouse gases, they represent an essential component of strategies for adaptation to, and mitigation of, climate change. They can make a significant contribution to building the resilience of communities globally.

Yet these systems continue to be degraded, annual rates of loss have actually accelerated in the last two decades. Since 1970, 81% of inland wetland species populations and 36% of coastal and marine species have declined. Over the last century we have lost 70% of our natural wetland area.

We, International Organization Partners to the Ramsar Convention, would like to remind Contracting Parties to the Convention that our role is to bring these concerns to the forefront of their activities on wetland management, protection and restoration. We call for a specific programme on Wetland Restoration under the newly adopted UN Decade on Ecosystem Restoration (2021-2030). This would help to urgently accelerate the work of countries in mobilising the Strategic Plan of the Ramsar Convention, and to act at the pace needed to deliver against the ambitious SDGs, Aichi Targets, post-2020 biodiversity framework, as well as the Paris Agreement on Climate Change. We must reverse the decline of natural wetlands, and one key strategy to do that is to restore wetlands and their functions as a key ally for all countries to adapt to climate change impacts, and to help store carbon.