The European eel is not just one of the most endangered species in the UK, it’s also one of the most mysterious. Fish expert and author Helen Scales finds out how we’re using science to divine its secrets and help numbers recover.

Think of an endangered species and you might picture a tiger or a panda. But there’s one animal at risk of extinction that you probably won’t call to mind, because it spends much of its time hidden. Peer into the dark waters of a river, a lake, or even a watery ditch at your local WWT centre, and you might spot a silvery body gliding by, as thick as your wrist and as long as your arm.

It’s a European eel, a fish once common and frequently caught in the River Thames to make eel pies and jellied eels. But now it’s on the list of critically endangered species that could disappear forever if we don’t take urgent action today.

‘Eels are extremely elusive,’ says Emma Hutchins, Head of Reserves Management at WWT – and she should know. In 2018, in partnership with Bristol Water, WWT conducted a vital survey to find out where all the eels are living in our wetlands at Slimbridge.

The team set nets across our ponds and waterways overnight and returned the following morning to see what they had caught. They transferred any captured eels by hand into buckets — ‘deep buckets’, Emma emphasises. She describes how the eels instantly try to escape. ‘It’s a writhing mass of muscular energy, which will erupt out of the bucket if you’re not careful,’ she warns.

The survey team were pleased to find 100 eels living in Slimbridge’s ponds and lagoons, all of them large adults over 40cm long. Some were yellowy-green. Other, more mature eels were silvery grey with white bellies, a colour that indicates that they are ready to reproduce. That was the good news. The bad news was that Emma and the team didn’t find a single young eel – or ‘elver’ – and, right now, nobody knows exactly why. 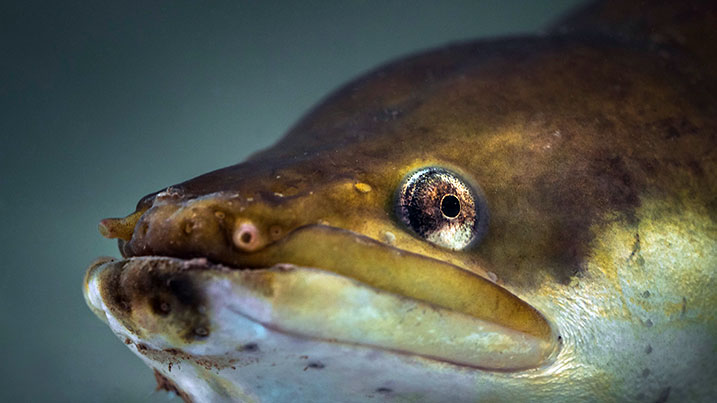 The life cycle of the European eel

It all begins near the island of Bermuda in the deep, blue waters of the Sargasso Sea. Eggs hatch into transparent, leaf-shaped larvae that join the salty river of the Gulf Stream as it sweeps North-East across the Atlantic. Their 4,000-mile drifting journey lasts a year or two before they reach the shores of Europe and North Africa. Here, they metamorphose into finger-length, see-through miniature eels – called glass eels – to continue their journey inland.

It’s this stage of the eels’ lives that has caused alarm over the species’ risk of extinction. In the past 40 years, the number of glass eels arriving in Europe has fallen by around 95%. A suite of threats is implicated in the eels’ demise – weirs and dams, hydropower and water-pumping stations could be blocking their migration pathways from the sea into the freshwater catchments where they grow and mature; overfishing, pesticides and parasites are believed to be part of the problem; and climate change may be shifting the track of the Gulf Stream so that fewer glass eels are hitching a trans-Atlantic ride.

Nevertheless, some precious glass eels still show up, especially in places like the Severn Estuary. ‘The River Severn has a big, wide mouth that faces towards the North Atlantic,’ explains Emma. It’s a welcoming sight for young and adventurous eels, which migrate upstream in search of a freshwater and estuarine habitat, their skin darkening in colour on the way.

Eels are known to frequent WWT Steart Marshes, where the River Parret meets the Severn Estuary. Created in 2014 when the sea wall was breached, eels have already found their way into our new saltmarsh habitats and made themselves at home. A survey last year found not only adult yellow and silver eels in Steart, but also young glass eels and an intermediate stage – the dark-skinned elvers also known as bootlace eels. Why, then, have no young eels been seen in Slimbridge, only 50 miles away as the eel swims?

The puzzle of Slimbridge’s missing eels remains unsolved.‘We’re confused,’ admits Emma. ‘We know glass eels were coming to Slimbridge 20 or 30 years ago, but for some reason very few are making it now.’ 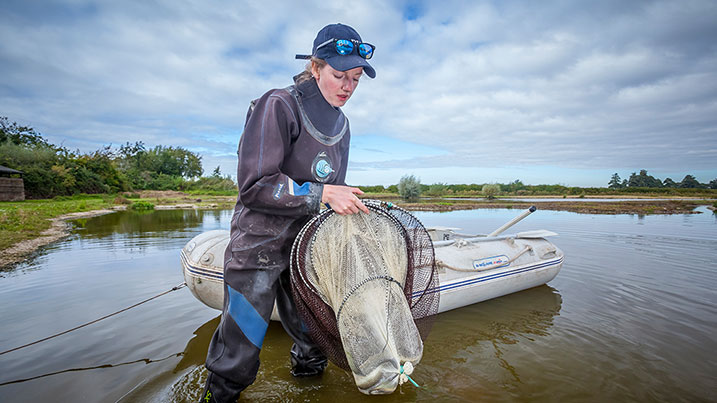 So, to improve the eels’ predicaments, we’re making routes into the reserve as eel-friendly as possible. One access point is a 400-metre tunnel built in Victorian times. Glass eels should be able to wriggle all the way along and into the reserve, but at very low tides they face a vertical two-metre climb into the tunnel. The solution is an eel pass, which looks like a plastic gutter with bristles inside that helps tiny eels to creep up.’It’s a ladder for eels,’ explains Emma. The most important thing we can do for eels is to manage the estuary so it facilitates their migration, but eel passes provide a fix when there is no alternative.

We’re adopting a different technique to help eels migrate at WWT Castle Espie on the banks of Strangford Lough in Northern Ireland. Here, the freshwater lagoon is maintained with pipes that have tidal flaps that close at low tide to stop saltwater flowing in. Unfortunately, they also stop glass eels from getting in. So, with help from experts from the Agri-Food Biosciences Institute, we’re setting out collecting devices that look like mop heads, to gather the glass eels as they arrive. Our team then gently carries the young eels in buckets to the freshwater pools on-site, where they are left to mature in peace.

Once glass and bootlace eels arrive at a freshwater wetland, they hang around, feeding and growing steadily, often for 20 years or more. Keeping these long-term residents happy is something else we’re working on, by improving their habitat.

We are now digging new ponds at Slimbridge and widening existing ditches. We’ll cut back vegetation and overhanging trees to reduce shading and encourage freshwater plants to grow. This will provide the eels with shelter to hide from predators, such as grey herons, and create the ideal habitat for the fish and invertebrates that eels feed on. ‘The work we’re doing will benefit the whole wetland ecosystem,’ explains Emma, ‘not just eels.’

In the future, our eel project will be rolled out beyond Slimbridge, across the wider Severn Vale area. We will identify structures across the landscape, such as sluices and culverts that act as barriers to migrating eels, and combine this with scrutiny of local maps to pinpoint potential bottlenecks. We’ll also conduct a broader study to see where the eels go and where they become stuck. ‘We’ll monitor eels both upsteam and downstream of structures that we suspect might be a problem,’ explains Emma, ‘to see if glass eels are making it through safely.’

Another aspect of our research will focus on what happens during the eels’ long lives. ‘Very little is known about how adult eels use freshwater habitats,’ says Emma. To find out more, we’ve been working with Bournemouth University to catch adult eels at Slimbridge and implant them with microchips – the kind used to identify pets. So far, we’ve tagged 20 eels. In future, any eels captured will be checked for tags with handheld scanners. ‘We want to know if eels stay put in the same ponds for years, or if they move around and try out different parts of the wetlands,’ Emma explains.

We hope the microchips will also shed light on the final stage of the eels’ lives. While young glass eels may have trouble climbing into Slimbridge, the silver adults should have no problem getting back out, driven by their urge to migrate and reproduce. We’ve installed a scanning device in a ditch that’s thought to be the main thoroughfare silver eels take to leave our wetlands. As each tagged eel wriggles past the scanner, a chip will record its details, before it embarks on an epic migration thousands of miles back to the Sargasso Sea where it will breed, then die.

Eels are just part of the mobile menagerie that visits Slimbridge. Whereas Bewick’s swans stop here each year on their annual migrations, eels come and stay for decades before returning to their natal waters. ‘They make this immense migration only once in their lives,’ says Emma. ’Why eels undertake these journeys, and how exactly they know where they’re going, are among the many puzzles that still surround these fish. But hopefully, as we learn more about them and take steps to make them more welcome, eels will keep coming back to our wetlands for many years to come.’ 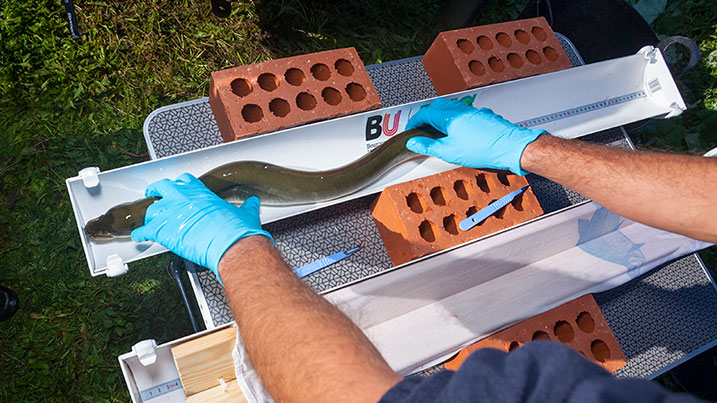 Where to see European eels

The wetland habitats provided at WWT centres are perfect for eels, and we know they’re there, even if you’ve never seen one.

HAVE YOU SEEN AN EEL?

Have you seen an eel at your local WWT centre or the surrounding countryside? If so, we’d love to hear from you! Please send your photos or a description of your sighting, even if it was of an eel being eaten by a bird or mammal, including exactly where you were at the time, to sightings@wwt.org.uk, or tag us on Twitter, Instagram or Facebook. This will help us to understand which catchments around our centres are frequented by eels, and identify any barriers to their journeys.

This article was originally printed in Waterlife, our quarterly magazine that's free to members. It's just one of the many benefits of being a WWT member.

Find out more about joining us