The Whooper swan undertakes what is probably the longest sea crossing of any swan species, migrating between 800 to 1,400 km between Britain/Ireland and Iceland, often flying at very high altitudes.

The whooper swan has a black bill with a large triangular patch of yellow, white feathers, black legs and a long thin neck, which it usually holds erect.

Although larger, the whooper swan can easily be mistaken for a Bewick’s. Both species migrate to the UK for winter, Bewick’s from northern Russia, whoopers from Iceland. Both species have yellow and black bills, although the Bewick’s has proportionally more black and less yellow; the patterns are unique to each individual, much as fingerprints are to humans, and can be used to tell them apart.

Where do whooper swans Iive?

What do they eat?

When overwintering in the UK, whooper swans feed on fields of improved grass, leftover potatoes, sugar beet, winter wheat and grain. On their breeding grounds in Iceland, they eat aquatic plants and sedges.

Although the whooper swan population is currently stable, several threats remain including: illegal hunting as well as habitat loss and degradation.

How is WWT helping whooper swans?

WWT’s long-term monitoring of whooper swans is one of the longest continuous wildlife monitoring programmes on earth. The data we have collected over the years has allowed us to understand the threats facing them and how they respond to conservation action. Waterbirds are good indicators of wetland quality and our large-scale counts of waterbirds like whoopers, have become one of the most powerful tools for the long-term monitoring of the health of our wetlands.

See swans in the UK

Whooper swans start arriving in the north of the UK and in East Anglia from September onwards. You can see wild whoopers up close at WWT Martin Mere, WWT Welney, and WWT Caerlaverock. 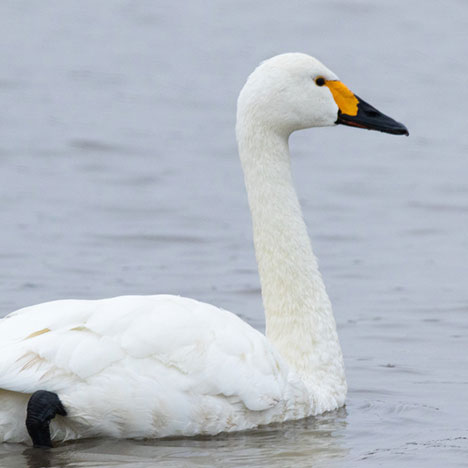 The UK's other migratory swan species.