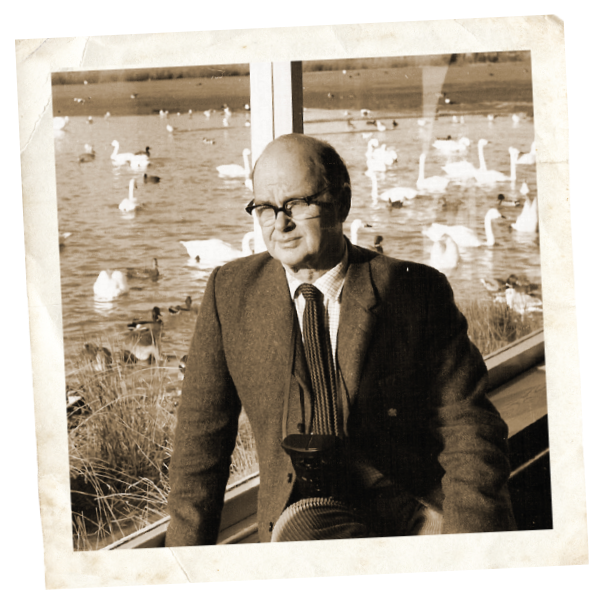 He left us the gift of nature.

Now it's our turn to pass it on.

Sir Peter Scott helped us all to get closer to nature.

With a gift in your Will to WWT, you can pass on that same precious gift to future generations.

If you have any questions or would like to talk things over in person, please feel free to contact Lucy England, our Legacy Manager and our Legacy team in complete confidence.

The gift of nature

The most effective way to save the threatened and decimated natural world is to cause people to fall in love with it again, with its beauty and its reality.

In founding WWT, Sir Peter Scott wanted you and your loved ones to be able to get close to nature. That’s why he opened Slimbridge Wetland Centre in 1946. Since then, we’ve gone on to open nine more sites across the UK.

At the same time, we’ve taken Sir Peter’s mission to protect wetlands and the wildlife that depends on it right around the world. As a result, many species have been brought back from the brink of extinction and wetlands that were once in danger of disappearing all together have been restored.

Thanks to the support of people like you, we are proving that wetland nature can recover. But for that recovery to continue, WWT will still need your support in the future.

The climate crisis and biodiversity emergency are posing an existential threat to our natural world. Wetlands have a vital role to play in combatting that threat. For example, despite currently taking up only 3% of the planet’s surface, wetlands store almost a third of the world’s carbon.

That’s just one of the reasons why, over the coming years, we have set ourselves the ambitious goal of creating and restoring 100,000 hectares of wetland habitat across the UK. This ‘blue recovery’ will mean greater biodiversity, better flood management, more carbon storage, cleaner water and more nature for our grandchildren to enjoy.

We will also be working with local and national governments around the world to harness the power of wetlands to support both the wildlife and the people who rely on them. It’s ambitious work, and it will take time to complete. But it is already underway, and the momentum is with us. Now you can make sure it continues.

With a gift in your Will, you really can pass on the precious gift of nature to all future generations of wildlife lovers.

Free Guide to Gifts in Wills

Your Will is an important and personal document, and we understand that you will want to give careful consideration to every decision you make about it. To help you decide whether including WWT in your Will is the right thing for you, we have put together a short Guide to Gifts in Wills.

The guide includes information about why having a Will is important and what it means for your loved ones. Whether you’re writing a Will for the first time or amending an existing one, you’ll find information on some of the issues you’ll need to consider, including the types of gift you can leave to a charity like WWT and why we recommend using a solicitor or professional Will writer. 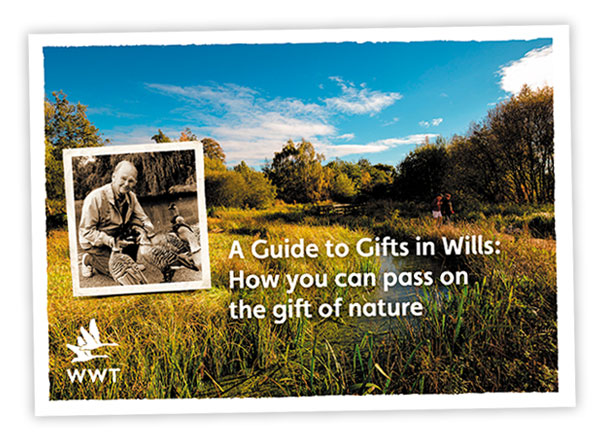 To request your free printed or digital copy, call 01453 891150 to speak to Lucy England and the Legacy team at WWT.

Or email us at giftsinwills@wwt.org.uk

If you have already decided to include WWT in your Will, here is the information you will need to give to your solicitor or professional Will writer:

Your Will is personal to you and there is absolutely no obligation to discuss its contents with us. However, if you would like to let us know your intentions, it can be enormously helpful. It means we can make sure we thank you and also only send you information that is helpful and relevant to your circumstances, including inviting you to appropriate events.

Why should I make a Will?
Only with a legally written Will can you make sure your wishes will be met after you die. Dying without a Will – ‘intestate’ – can cause unnecessary distress to family and friends.

Can I write my own Will?
We strongly recommend that you use a qualified solicitor or professional Will writer to write your Will as any errors can make it invalid and cause complications for your beneficiaries.

Who should I choose as my executor?
Your executor is the person or people you choose to look after everything you leave behind – known as your ‘estate’. It can be any person that you know and trust such as a close friend, a relative or your solicitor.

Can including WWT in my Will reduce inheritance tax?
Including WWT along with any other charities in your Will can reduce the tax burden on your beneficiaries. However, the rules do frequently change so you should discuss them with your solicitor.

What if I already have a Will?
You can add WWT to an existing Will very easily by asking a solicitor or Will writer to draw up an amendment known as a ‘codicil’.

Should I tell WWT I’ve included you in my Will?
Your Will is personal to you and there is absolutely no obligation to discuss its contents with us. However, if you would like to let us know your intentions, it can be enormously helpful. It means we can make sure we thank you and also only send you information that is helpful and relevant to your circumstances, including inviting you to appropriate events.