How different birds build their nests and rear their young

As the rays of sun poking through the clouds get steadily warmer, we’re reminded that breeding - and therefore nesting - season is upon the UK.

If you like to get out in nature, you've probably spotted birds building and caring for their nests. But you might be surprised to learn that wetland birds have such different ways of nesting and raising their young.

Here you can find out about the amazing ways various common (and not so common) species approach parenting, and how diverse their young look!

These birds all nest on the ground near water. Waterbirds prefer freshwater like lakes and streams, whilst seabirds occupy (but are not restricted to) salty or brackish coastal wetlands. 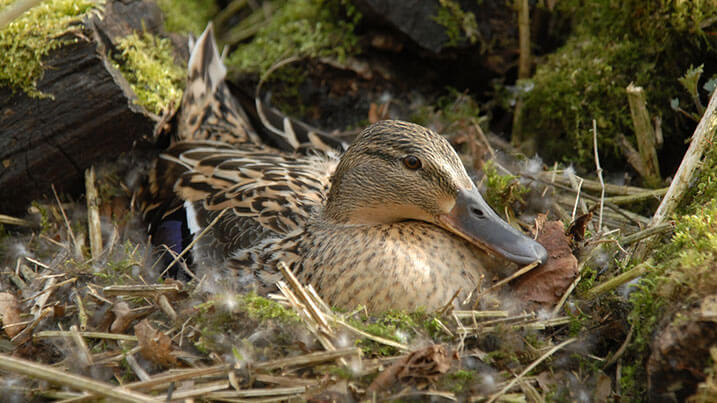 How and where do they nest? The nest is made from grass and leaves on the ground, and down plucked from the mother’s breast.

Parenting style All ducklings are ‘precocial’, or in other words ready to walk and feed very soon after hatching. Once the mallard mother has laid the eggs, she sits on the clutch for around 23 hours a day until they hatch. 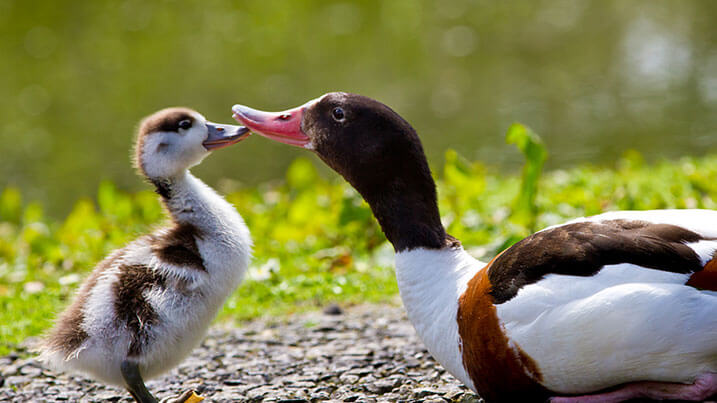 How and where do they nest? Shelduck nest in a burrow or low hole in a tree. Almost immediately after the young shelduck have hatched, the ducklings are led from the nest by the parents and other 'spare' adults to the feeding and nursery area, which can be up to a mile away.

Parenting style Many broods join together to form a creche under the supervision of one or more adults. Creche size is 20 - 40, but a creche of almost 200 ducklings attended by a dozen adults, has been recorded on The Wash!

WATCH: An unbelievable amount of shelducklings swimming about! (Wait for it....) 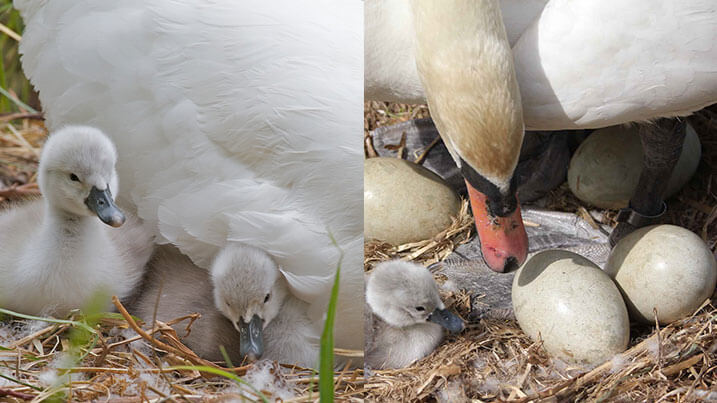 How and where do they nest? Swans build huge nests on the ground, sometimes up to two to three metres in diameter, mostly around rivers and streams. The cob (male swan) usually chooses the nest site, but if the pen (female swan) doesn’t like it, he’ll have to try again!

Parenting style Male and female swans form long-term partnerships to raise cygnets year on year, the benefit being that they can learn from their errors and successes in previous years. Less romantic, and more pragmatic, but monogamy works very well for this family of species - especially the far-migrating Bewick’s swan. 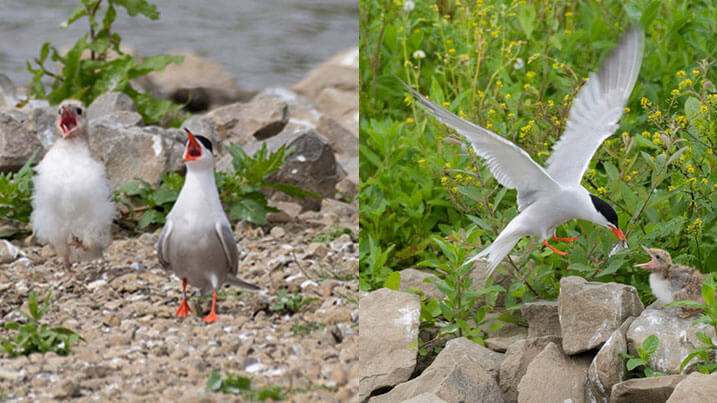 How and where do they nest? Common tern, also known as ‘sea-swallows’ because of their long forked tails, make their nests on rafts or small islands on any body of water where there are small fish to catch. They usually lay eggs in batches of three. In the UK, eggs are vulnerable to predation by rats and American mink, so it's important to monitor these numbers on our reserves.

Parenting style Common tern migrate to the UK over extraordinarily long distances to breed. Their young need a great deal of care from the parents at first, and the mother normally stays with the chicks round the clock during their early stages. 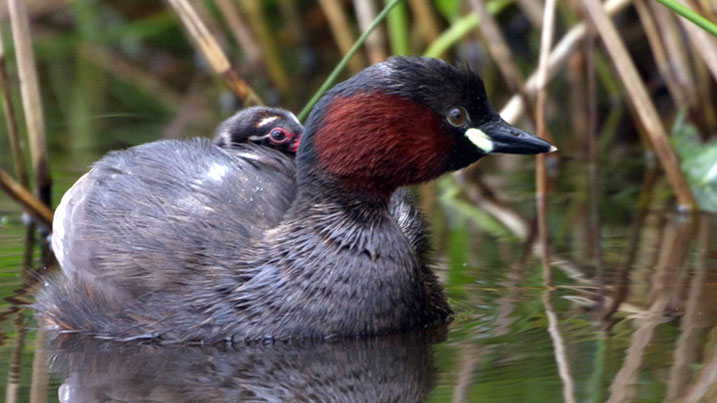 How and where do they nest? The little grebe or ‘dabchick’ is a real waterbird and only really comes to land to breed. The nest is an intricate floating platform made from vegetation and twigs, attached to the ground under the surface. When it leaves the nest, it often covers it with weeds to disguise it from predators and keep them insulated.

Parenting style This endearing diving bird sometimes gives its new chicks a ride on its back where it’s surprisingly well camouflaged. A baby grebe is sometimes known as a 'grebette'.

WATCH: A little grebe father feeds his chick some fish, but the youngster is having a bit of trouble with coordination!

This group are all very different but have one thing in common - they make their nests up off the ground in trees, banks or reedbeds. 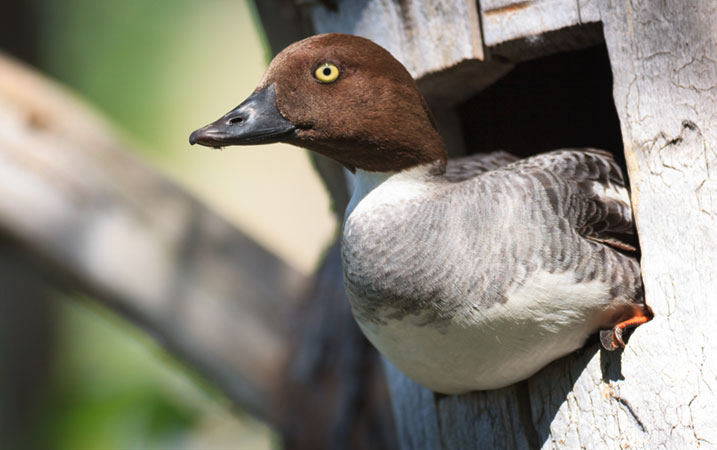 How and where do they nest? Common goldeneye are diving ducks, yet they nest high up in trees. They only currently nest in northern Scotland in the UK, where nestboxes provide a useful replacement now that there are far less large trees with suitable holes available.

Parenting style Just one day after they hatch goldeneye chicks will leave the nest. This can be quite a risky manoeuvre, as the nests might be up several feet - sometimes as high as 40! The female will stand at the base of the tree and call for her young who will bravely tumble toward her. 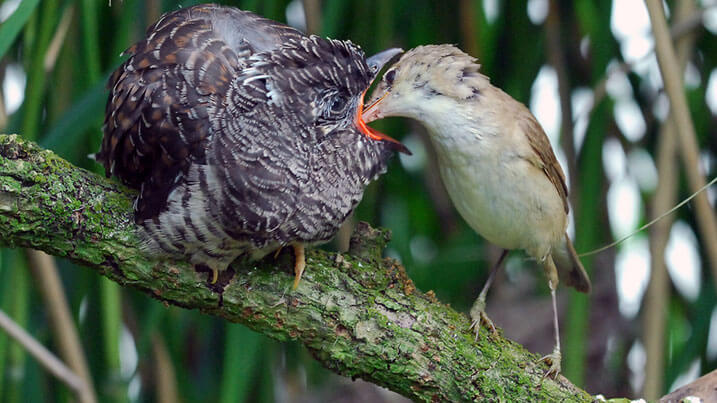 How and where do they nest? The source of the saying ‘cuckoo in the nest’, the female cuckoo lays her eggs in other birds’ nests so that she doesn’t have to raise them.

Parenting style It can take as little as four seconds for the female to swoop in, lay an egg and displace one of the birds’ own eggs, before flying off. The subsequent chick quickly outgrows its ‘parents’, and they have their work cut out to feed a nestling eight times heavier than them!

How and where do they nest? Reed warblers prefer to nest almost exclusively in reedbeds or wet marshy areas. They weave their nest as a sling in between reeds. Reed warbler eggs have beautiful mottled splotches on their shells. But these aren’t just for looks - they’re their own individual and complex stamp to foil cuckoos who would hide their eggs amongst them!

Parenting style Reed warblers are usually monogamous, lay 3-5 eggs and the chicks fledge in 10-12 days. If a predator approaches the nest, the adult reed warblers may feign injury to draw them away. The parents are very dedicated, which could be why the cuckoo has evolved to target them. 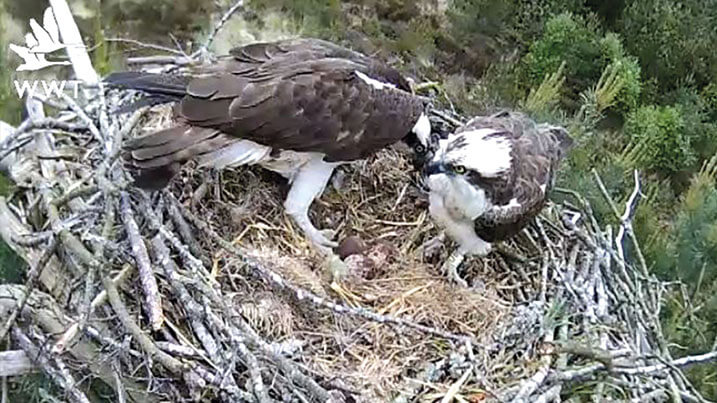 How and where do they nest? Osprey nest near bodies of water, exhibiting their incredible fishing technique. Most nests tend to be on top of a large tree, called eyries. If they fail to breed, they might even start building a new nest, fittingly called a ‘frustration eyrie’. Their eggs are off-white to pinkish in colour and not much bigger than a hen’s egg.

They are very faithful to nesting sites, migrating back to their favourite (one being near the WWT Caerlaverock site where we’ve had osprey nesting in the past) from west Africa from late March onwards.

Parenting style Osprey are quite caring parents for birds of prey. Unlike eagles or owls, there isn’t usually extreme sibling violence, as the parents are very attentive and keep the chicks fed with a steady food supply until they’re ready to leave. 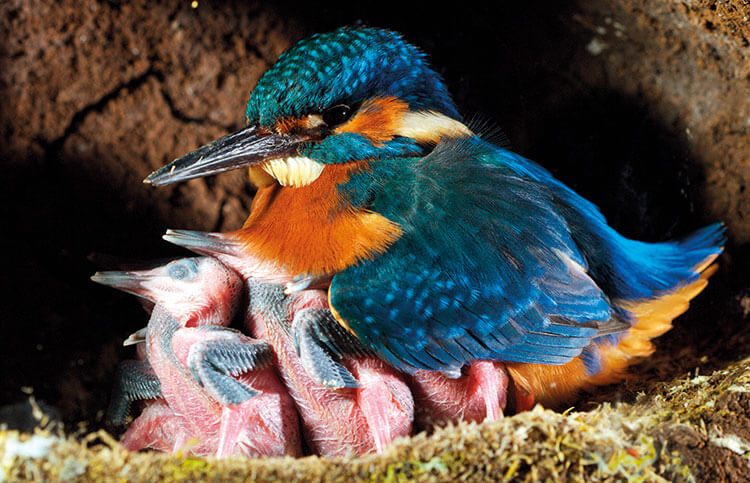 How and where do they nest? The nest is generally in the top metre of an almost vertical sandy riverbank or among the roots of a tree. Both sexes help to excavate the tunnel, which terminates in a round chamber. Tunnel nesters tend to have white eggs because the burrow is dark, so it helps the parents find them with little light.

Parenting style Both parents incubate the eggs, and before the young fledge, they may eagerly approach the entrance of the tunnel waiting to be fed. The juveniles are very democratic with food and share fairly with their siblings!

Ground-nesting birds have adapted to lay dull, dappled eggs (they look rather like the speckled eggs you eat at Easter). This is so they’re as camouflaged as possible from predators. Eggs are often laid in four-egg clutches and come to a clear point, for compactness when being laid in a coastal scrape or wet grassland. 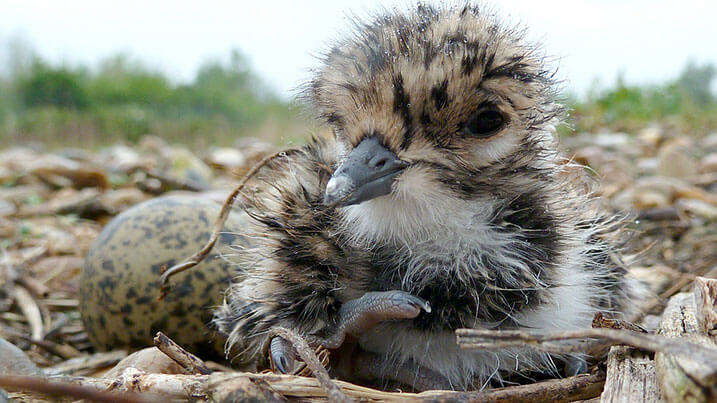 How and where do they nest? Lapwings nest on the ground in open field or coastal scrapes, making them vulnerable to predation and agricultural activity. Lapwing and other field or wet-grassland nesting species like curlew and redshank are sadly declining due to these reasons.

Parenting style Lapwing actually need different conditions for nesting and chick rearing. The chicks are able to walk and feed almost immediately, and require a diet of invertebrates. The most hazardous time in a lapwing parent’s career is when they move the chicks from the hatching site to the chick-rearing site, as they cannot fly at this stage.

WATCH: A lapwing chick shows off its feeding technique 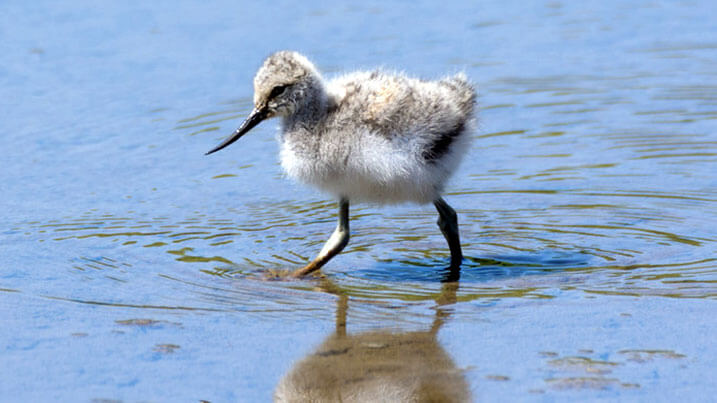 How and where do they nest? Pied avocets breed near brackish water (semi-salty) and exposed bare mud.

Parenting style Avocet parents are very bolshy and fun to watch during spring, where they can take over entire scrapes of coastal wetlands with their aggressive, nest-protecting behaviour.

WATCH: Three avocet chicks wander around under the watchful eye of their parent 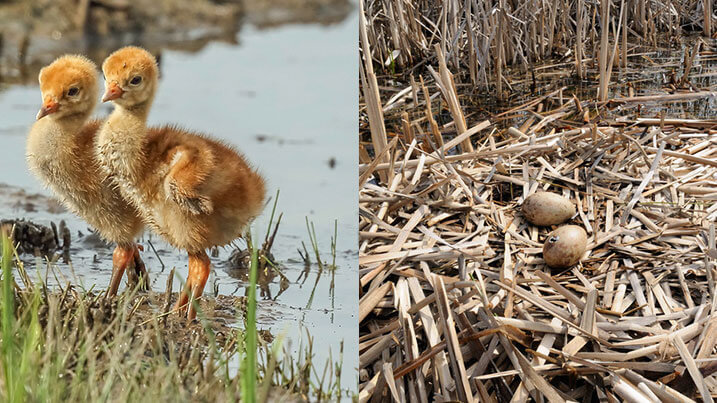 How and where do they nest? Common cranes are wary of people and usually build nests far away in boggy or marshy areas, but they’ve been observed building a nest near a WWT Slimbridge bird hide because no one usually ventures onto that land - thus not posing a threat.

Parenting style The parents both take an active role in the incubation process, sharing the time spent keeping the eggs warm. The baby cranes are just six inches tall (15cm) when they hatch, and are quickly able to walk, swim and run. Over the next 10 weeks both the parent birds will protect their chick from predators such as foxes. 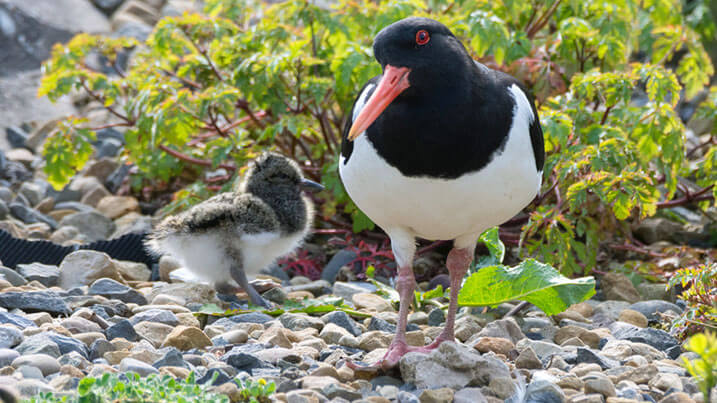 How and where do they nest? As oystercatchers nest among stones, the young have adapted to be very well camouflaged. Oystercatcher eggs look like they’ve been Jackson Pollock'd, with pretty speckles and streaks.

Parenting style The oystercatcher is unusual in that they continue carrying food to their chicks even after they have fledged - all other wader chicks fend for themselves after this stage.

WATCH: An oystercatcher parent feeds its chick and shows it how to use its beak

Tips for how to behave around nesting birds

How we protect new life on our reserves

Being a young bird is no joke, and a chick’s life is fraught with danger until they’re old enough to fend for themselves. Many species you can observe in wetlands are specifically adapted to bring up their young in a variety of different habitats, habitats that are fast disappearing due to land use and pollution. But new wetlands could provide a vital home for these tiny creatures.