Water voles vs. rats: how to tell the difference

Notoriously shy, water vole (Arvicola amphibius) could once be seen peeping out of riverbank nooks and crannies throughout the British countryside. Then, their numbers started dropping in the UK due to habitat loss. Even worse, the introduction of the invasive American mink decimated their population, which fell by up to 90% from 1989 to 1998*.

Unfortunately, countrywide there is still a continuing declining trend in the England population. However, the European water vole is growing in numbers at many of our wetland sites. At WWT Slimbridge, the length of bank used by water voles went from just 250m to over 15 kilometres in just four years thanks to the careful management of our ditches. And we will continue to manage watercourses to give the water vole a helping hand.

So if you’re lucky enough, you might see (or hear) one. But how do you know if you've seen a water vole - or was it the more common brown rat? The character of 'Ratty' in the Wind in the Willows (who was actually a water vole) has probably confused things for a while. But as you'll see from the comparison table below, water voles and rats aren't actually all that similar. 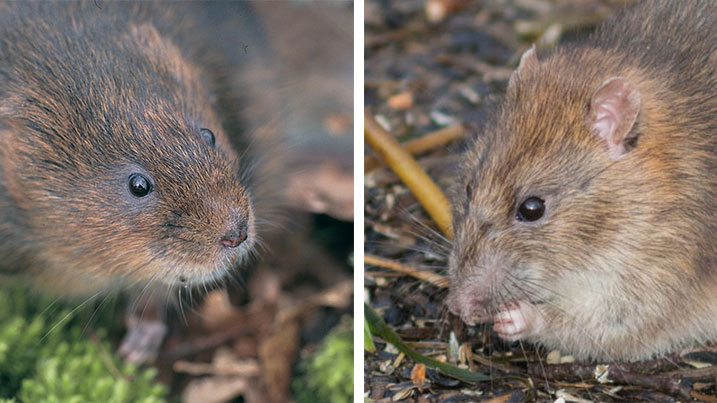 If in doubt, and you don’t get a chance to note the blunt face, seemingly spherical body and fuzzy tail, the unmistakable ‘plop’ will likely mean - it's a water vole!


Unlike water voles, brown rats are incredibly adaptable, larger and more aggressive - which can actually pose a problem for water voles and other species. To avoid attracting rats, it;s best to use bird feeders that control the amount of food that falls on the ground.

They’re easier to see during spring, but can be seen all year round as they don't hibernate. For the water voles that have survived the winter, early spring is the sign to get a head start on producing their young, called pups. The pursuit of finding a mate brings them out of hiding, and they’re extremely territorial, despite looking so adorable! Because of this, they tend to be aggressive to their neighbours and therefore easier to notice.The female water vole will also deviate from her usual vegetarian diet to eat caddisflies and snails during pregnancy, so will be more active to find this food.

Water voles can be seen at a number of WWT centres including , Slimbridge, Llanelli and Arundel.

All these species and many more rely on wetlands to live and breed. Yet wetlands are disappearing three times faster than forests. We need your help in our mission to restore, create and protect new life.

Find out how you can help

*Statistic published by the People's Trust for Endangered Species