At the start of National Volunteers Week June 1 - 7, Martin Mere Wetland Centre, run by the charity The Wildfowl & Wetlands Trust (WWT) has paid tribute to its army of volunteers who helped the site get through the past, difficult year.

From testing water samples to answering the phones, many of the more than 100 numbers of volunteers put their fears about Covid-19 aside to help make sure Martin Mere came out of the pandemic in as strong a position as possible. At the same time, volunteers have spoken about how their work has helped with their own mental health. 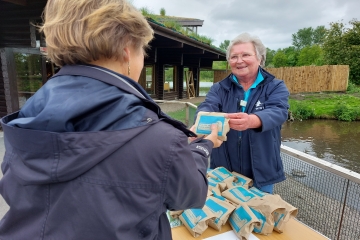 Di has been volunteering at Martin Mere since 2015. She said her partner died in 2014, and she wanted something to occupy her mind. “I didn’t feel ready to give up altogether,” she added.

Starting from day one on the front desk giving out information and greeting visitors, Di has always enjoyed the social element of the role. This also includes taking people on guided tours of the grounds – which she has been given training to do.

Although Di has not been able to work through the lockdowns, she did return to Martin Mere for a couple of months last year and is now back at work again. “It’s absolutely wonderful to be back, it brings some sort of normality into your day,” she said. “The schools are coming back now and it’s really good to see the children arriving, so excited.”

Di also said how beneficial volunteering at Martin Mere was for her wellbeing. “You build up real friendships in your team, people who all have a common interest,” she added. “There is a real sense of community”.

Nicola Stanford, Head of Volunteering at WWT, said the centre was immensely grateful to all its volunteers, including those who carried on working right through lockdowns but also those who have not yet been able to return but have expressed a readiness and willingness to come back when they can

“We really couldn’t have done it without them,” she said. “It has obviously been an incredibly tough year for everyone and Martin Mere is no exception.

“When it comes to things like wildlife you can’t just lock up and go home, so to know we had people all around the country willing to carry on helping where and how they could, even while our own staff were often on furlough and unable to come in, was extremely reassuring.

“As well as helping on the reserves they also helped keep things ticking over in other areas – from answering phones, to logging requests – which meant we were in a good position for when it came to our re-opening.

“I really want to pay tribute to all of them both those who have returned and those waiting to come back and say a huge thank you for all the work they have done, both before, during and since the end of the lockdowns over the past year. And as things hopefully start to get back to normal”.

As well as helping Martin Mere, many of the volunteers have spoken about how the work they do is also beneficial to their own mental health. WWT recently launched a new scheme called Blue Prescribing which aims to promote wellbeing in people experiencing mental health problems. Dr Jonathan Reeves, WWT’s Principal Research Officer (Health and Wellbeing) said there was growing evidence that being in nature can reduce stress, anxiety and depression.

“So many of our volunteers speak about how volunteering with WWT makes them feel better – not just because they feel like they belong to a community of like-minded people but also because being outside, around nature and in particular by wetlands really is a mood-booster,” he said.

“This has been particularly important over the last year, so it’s great to know many of our volunteers were able to keep working either between or even in some cases through all the different lockdowns.”

If you are interested in volunteering at Martin Mere please click here to have a look at the current vacancies.