We’re open and looking forward to welcoming you back but please note that everyone needs to book their visit in advance. We’ve made other changes too and restricted or closed some of our experience. Visit the bookings page for details.

The Bewick's are back!

Gastro, a healthy young swan is the first of this year’s Bewick’s swans to arrive at the famous Rushy Lake at Slimbridge. Gastro, thought to be around five years of age, was accompanied by a previously unknown swan, since named by the researchers as ‘Roux’.

The pair was spotted on Sunday (27th), probably having travelled from the near continent overnight on Saturday. They will most likely have taken advantage of the clear, star-lit sky across most of southern England that evening to aid their navigation, whilst a drop in the south-westerly head-winds would also have facilitated migration across the North Sea to their Gloucestershire wintering home.

Driven by the onset of the winter in their arctic breeding grounds, many of the Slimbridge-wintering swans stop over en-route in the Baltic Countries, Germany, Denmark and the Netherlands, before embarking on their final leg of their 3,500km journey to the UK.

In the Netherlands, October is known as aarselmaand - hesitation month - the time between autumn and winter, where the weather is uncertain, and anything is possible. Although earlier than last year, this pair’s appearance is by no means the earliest. That accolade goes to the eponymously named, ‘Record Breaker’, who was a yearling at the time, when he arrived on 11th October 2015, beating the previous record of 12th October set by Tomato & Ketchup back in 1980.

“The first arrival of these birds each year is always an exciting time for us at Slimbridge. The fact that Gastro is a comparatively young bird and has possibly brought a new mate to join him to overwinter with us is great news.

“Swans usually mate for life, and we hope that Roux could be a potential mate for Gastro, and together they could be the start of an exciting new swan ‘dynasty’ here at Slimbridge.

“Families tend to be the dominant groups on our Swan Lake, and they generally arrive that little bit later, so we’re keeping our eyes peeled, as the weather window over the next few days may well bring in an influx from places where they are currently staging in continental Europe.

“The arrival of the pair, coinciding with the first frost of the autumn at Slimbridge is a clear sign of winter, and we expect these to be the first of many hundreds of Bewick’s and other migratory birds over the coming days and weeks.” 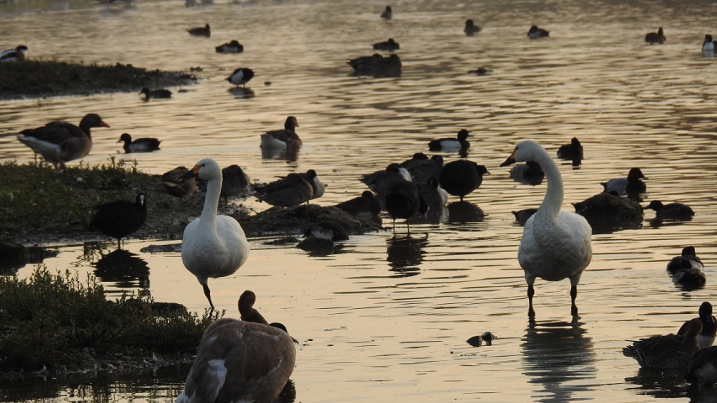 WWT founder, Sir Peter Scott, took great delight in watching and studying Bewick’s swans at his Slimbridge home. Painting the birds from his window back in 1964, and recording them in his diaries, he noticed that each bird has a unique bill pattern, a bit like our thumbprints. It is this unique identifier that has enabled researchers at WWT Slimbridge to be able to compile and maintain detailed records of each bird, their family trees and dynasties.

Thanks to support from players of People’s Postcode Lottery, WWT is able to continue one of the longest and most important single-species studies in the world. The study has been running continuously for over 50 years and recorded the life histories of more than 10,000 swans during that time.

Bewick’s tend to be long-lived, but usually only two or three cygnets per family make it to their wintering sites in northwest Europe, and less than half of the population makes a breeding attempt each year. Numbers decreased from around 29,000 in 1995 to just 18,100 recorded in 2010, and conservationists are still trying to confirm the reasons for the decline. There is no evidence of a long-term change in the measures of breeding success, but possible reasons for the decline could be lower survival rates (e.g. through illegal hunting, habitat loss and/or collisions with man-made structures such as powerlines) or a redistribution associated with environmental change.

Countries in northern Europe and Russia have introduced several measures to try to stem the decline, including continuing protection for a chain of wetlands vital for the swans to feed and rest along the migration route, assessment of new sites important for the birds, and the development of a “Swan Champions Project” which aims to understand and reduce levels of illegal hunting. The most recent international census of the Northwest European Bewick’s Swan population suggested a slight recovery to 20,100 birds in January 2015, but results of the next census (scheduled for January 2020) should determine whether the population decline is reversed or ongoing.

You can now wake up to wildlife and the Bewick's swans by staying at Scott House Bewick's Lodge. Walk in Sir Peter Scott’s footsteps, with access to his personal viewing tower and magical sights over his beloved Rushy Lake, this experience is a must for bird lovers, Scott fans or anyone wishing to get closer to nature: learn more