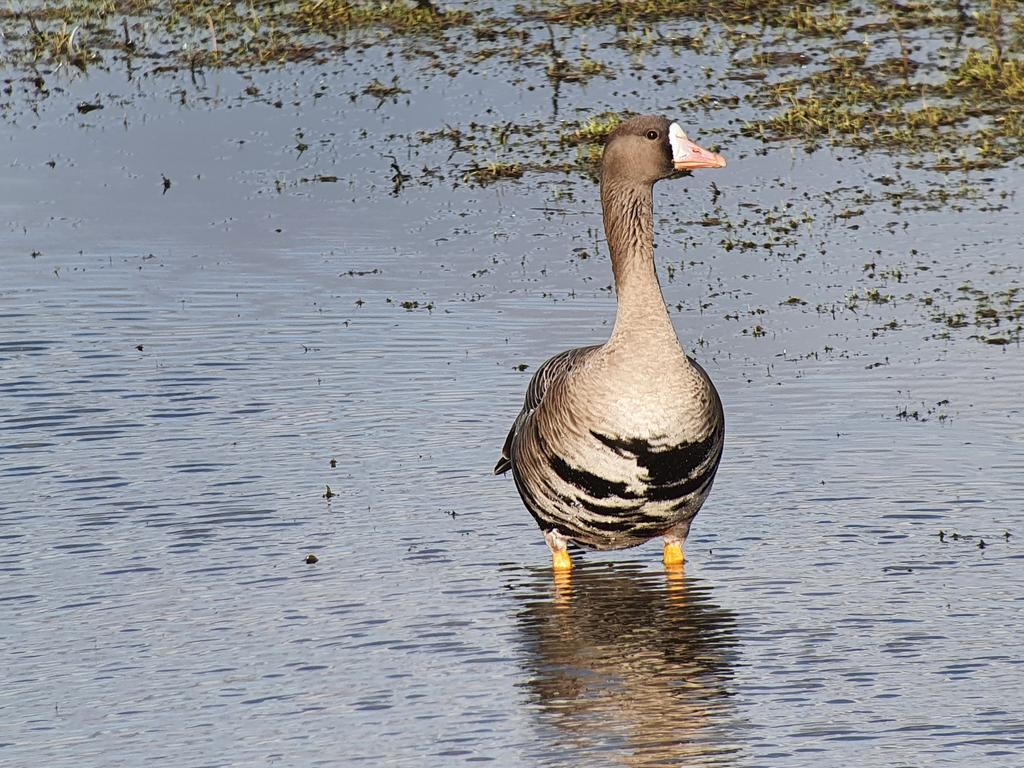 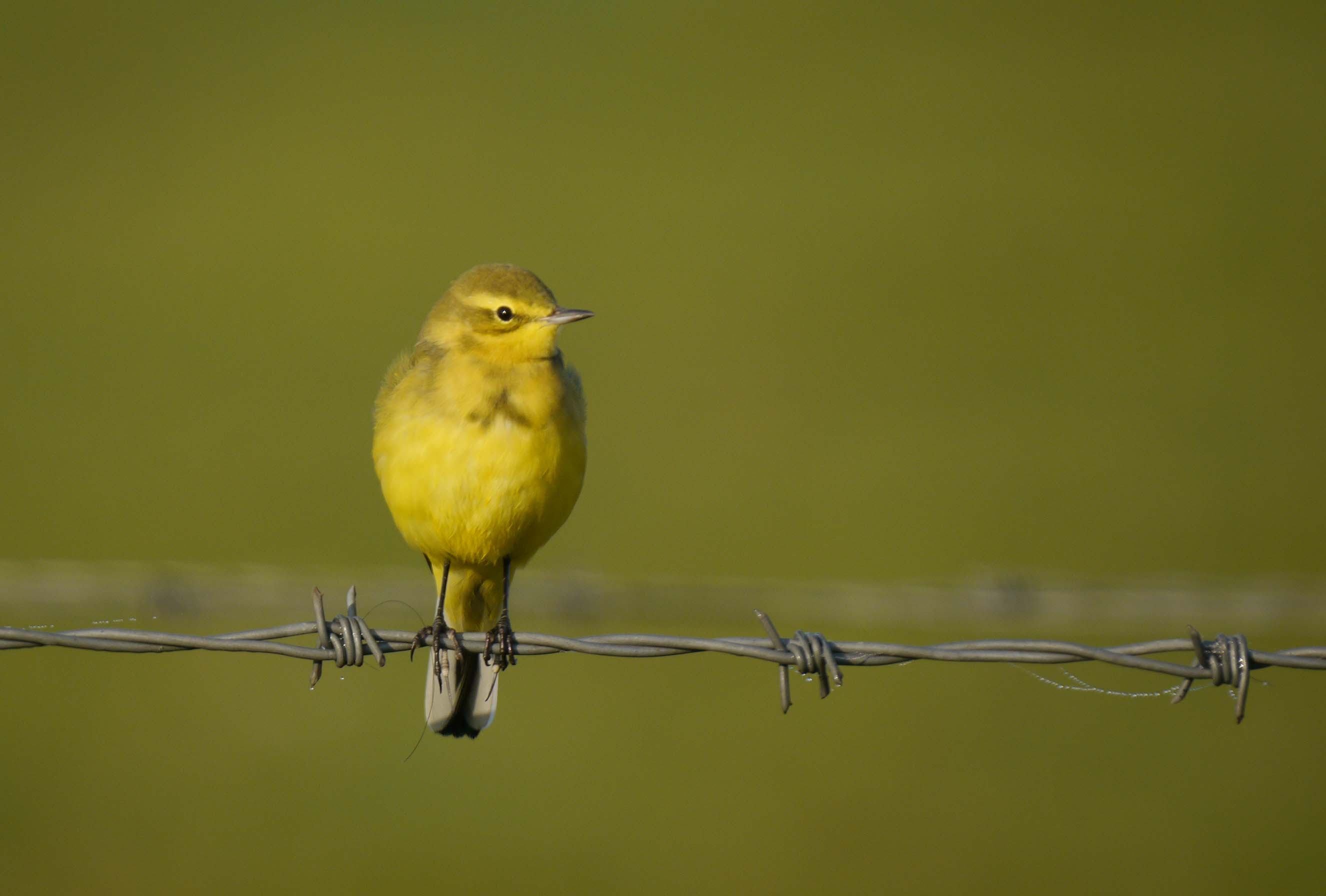 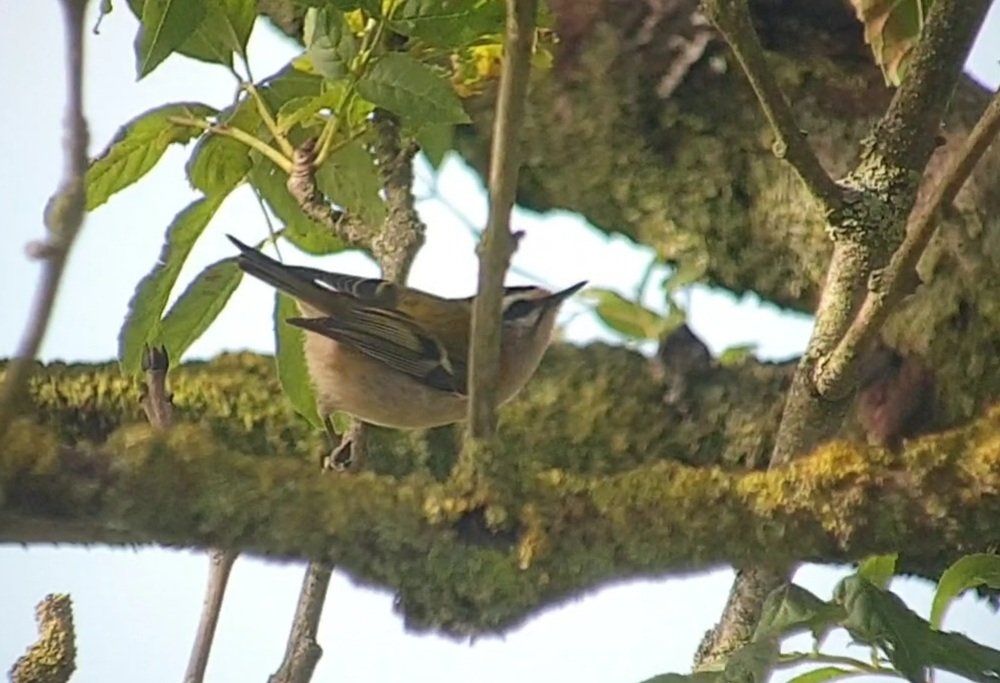 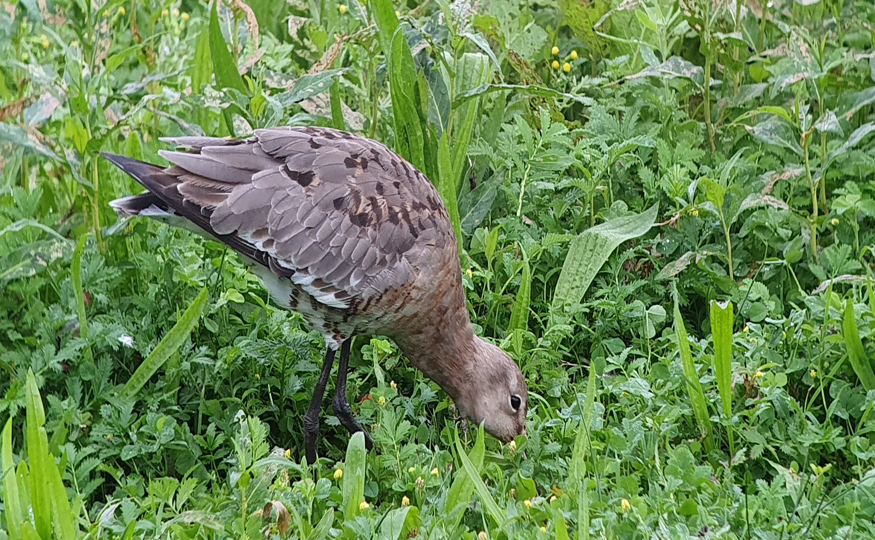 The rain and overcast conditions dropped in a few passage birds today, a distant and due to the conditions, rather tricky to study flock of 45 Common/Arctic Terns were settling on the mudflats and pools off Middle Point, at least two Black Tern accompanied them with a Sandwich Tern nearby associating with the Black-headed Gulls. Earlier a Great Skua flew upriver at 0735-0740am. MJMFurther sightings from the hide rounds to 0930am included the following.Middle PointGreat White Egret, flock of Common/Arctic Terns, single Sandwich and 2 Black Terns, Spoonbill and Spotted Redshank flew toward the scrapes, 4 Golden Plover upriver, Wheatear at the point.The DumblesTwo Peregrines.South LakeTwo Green Sandpiper, 27 Ruff (early on but some moved off), 89 Black-tailed Godwit, 2 Redshank, 1 Snipe, 116 Teal, 33 Shoveler, 33 Tufted Duck, 33 Pied Wagtail and 2 drake Pochard. A Kingfisher settled on the perching rail.Rushy HideSpotted Redshank, 13 Redshank, 1 Avocet and 40 Teal on the lower pond. Tack Piece45 Teal and 30+ Gadwall + 4 Black-tailed Godwit. Top New Piece188 Lapwing, 11 Ruff (many of these had probably relocated from South Lake), at least one Snipe, 300+ Teal with Shoveler and Gadwall.Lower DumblesRoss's Goose with the Barnacle Geese.-----------------------Keep an eye on the Twitter account for any retweets and updates throughout the dayhttps://twitter.com/slimbridge_wild 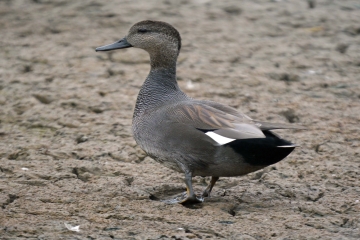 Eclipse is over for some

Many of the drake Gadwall (pictured) have now completed the moult from eclipse plumage, this is when they replace feathers to become camouflaged during the flightless period. Fresh smart feathers mean they are looking great, this enables them to show off again so a number of them are displaying to pair up in readiness for the Spring.Other sightings form the hide rounds to 09;30am includeMiddle PointThree Sedge Warbler, and 4 Reed Warbler in the reeds, Wheatear on the fence + Greenshank heard. Spoonbill flew to pool off the Dumbles, Great White Egret fishing in pools, 2 Pintail in the main channel, flocks of Curlew, small waders and Shelduck distant in N section of basin.Tack Piece70 Teal and 30 Gadwall.Rushy200 Teal, 12 Redshank, 10 Ruff, 40 Black-tailed Godwit, single Green Sandpiper and Avocet. South Lake42 Black-tailed Godwi, 4 Ruff and 32 Pied Wagtail on the scrape + Mandarin and 2 Pochard on deep lake.The DumblesPair of adult Peregrine on a kill + immature bird flew N upriver, Crane feeding on the saltpastureTop New Piece400+ Teal with small numbers of Wigeon, Shoveler and Gadwall + single Pintail, 21 Ruff, 10+ Snipe, a few Black-tailed Godwits. Bottom New PieceRoss's Goose with the Barnacle Goose flock. South Finger (Filter) Reedbed walk- 20+ Chiffchaff and 5+ Blackcap. 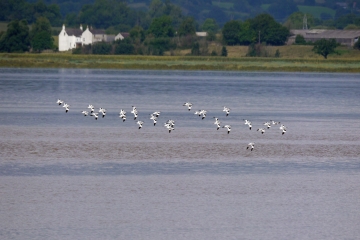 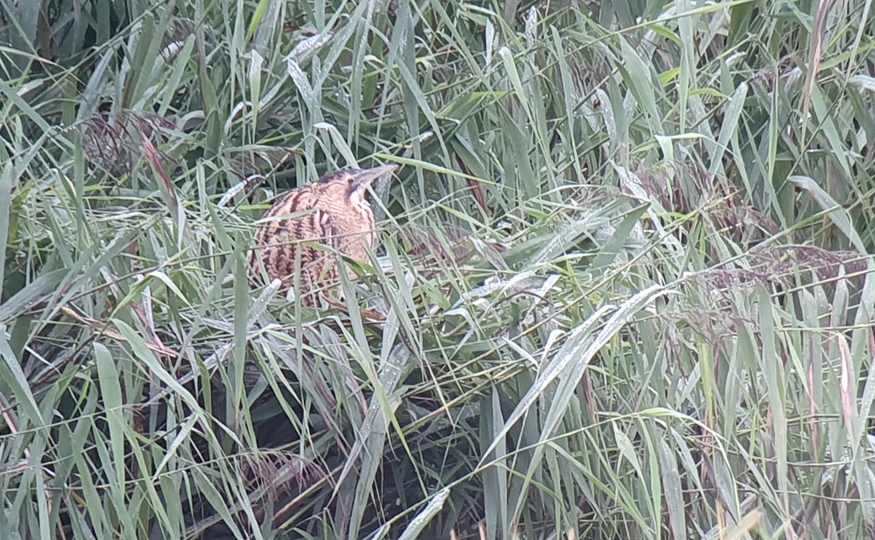 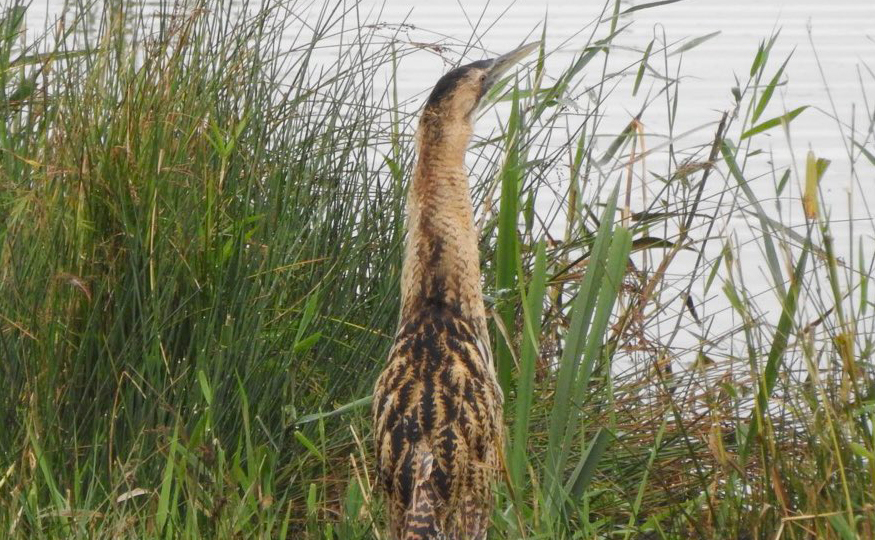 Look out for the Bittern 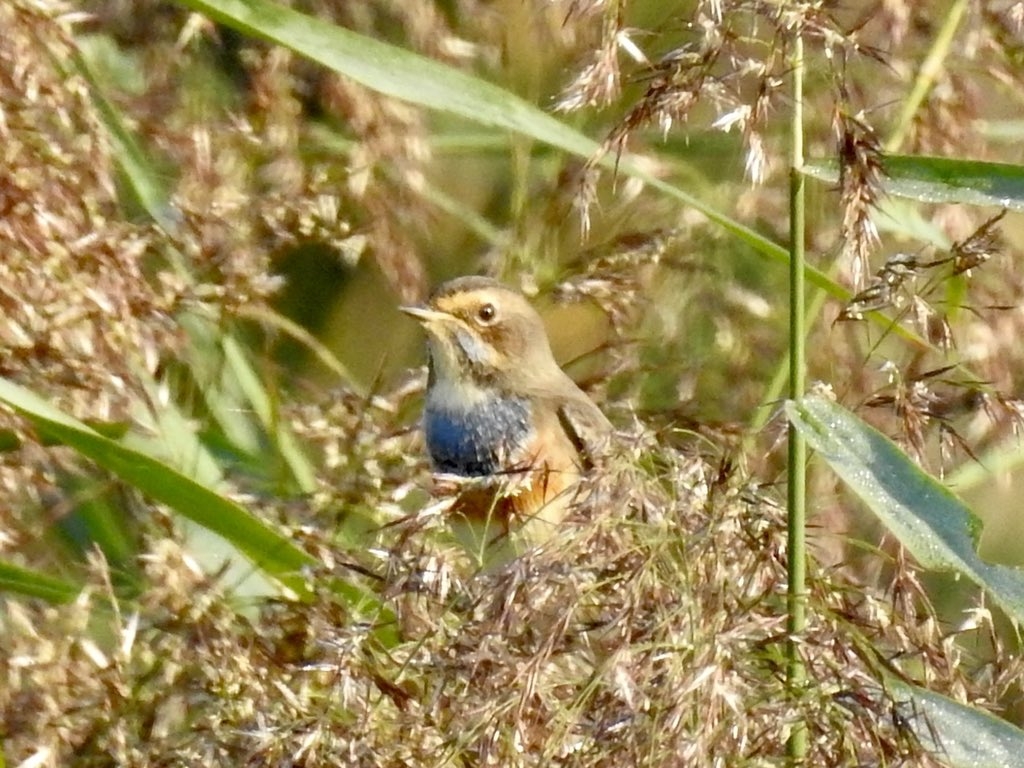 BluethroatA quick check of Middle Point whilst passing this morning revealed a few passerines, two Whinchat were being harassed by Reed buntings, a couple of Reed Warblers were calling, two Blue Tit and a Chiffchaff fed in the reeds but best of all was a smart moulting male Bluethroat that appeared atop the reeds for a minute. It was viewable from the Shepherds Hut Hide on the seawall. Probably best to try to view it from here for the best chance of seeing it, if trying your luck please refrain from using playback recordings. Early opening for WWT members from 0815am to 0930am, use normal admissions via the ramp from 0930am.If coming in earlier, please have your membership card ready for checking, thank you.Video of the bird herehttps://twitter.com/i/status/1434786377313423364MJMOther sightings included the following.Middle Point/Dumbles saltmarshJuvenile Curlew Sandpiper and three Sanderling flew past S with a flock of Dunlin and Ringed Plover-all headed to the saltmarsh, seven juvenile Turnstone, 3 Oystercatcher and 6 Ruff in with the Curlew/Shelduck/ gull roost + 13 L Egret and the immature Spoonbill on the shore.Top New PieceTwo Great White Egret, 2 Grey Heron, 500+ Teal, 12 Wigeon, 18 Shoveler, 2 juvenile Ruff with the Lapwing flock. A Bittern was showing from the Van de Bovenkamp Hide.Bottom New PieceRoss' Goose with the Barnacle GeeseRushy HideNow three adult Spotted Redshank roosting on the islands with 4 Greenshank, 4 Black-tailed Godwit, 7 Avocet, 17 Redshank and 2 Snipe + 30 Gadwall, flocks of Teal. Knott HideJuvenile Ruff, 7 Snipe, 2 Little Egret, juvenile Black-tailed Godwit on the Pill Box Pool, a few Reed Warbler, Blackcap and Chiffchaff. Middle Point- 2 Whinchat, 4+ Reed Bunting, 2 Reed Warblers. South Lake26 Ruff (min of 37 on site today), 4 Avocet, a Greenshank, 2 Snipe, c50 Black-tailed Godwit, 2 Green Sandpiper, c60 Teal, c30 Lapwing as well as the duck flocks, Cormorants, Canada and Grelag Geese, Yellow Wagtail with the Pied Wagtails.A Glossy Ibis was seen to arrive from the NE and settled on the wader scrape for a time today.Marsh Tit seen at the North end of the reserve, very scarce these days. 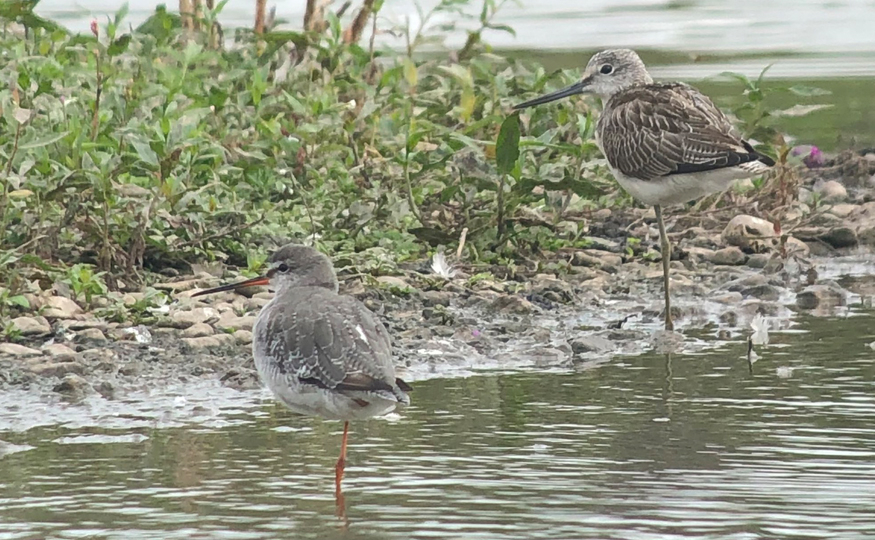 It has been a busy morning for migrating waders and warblers 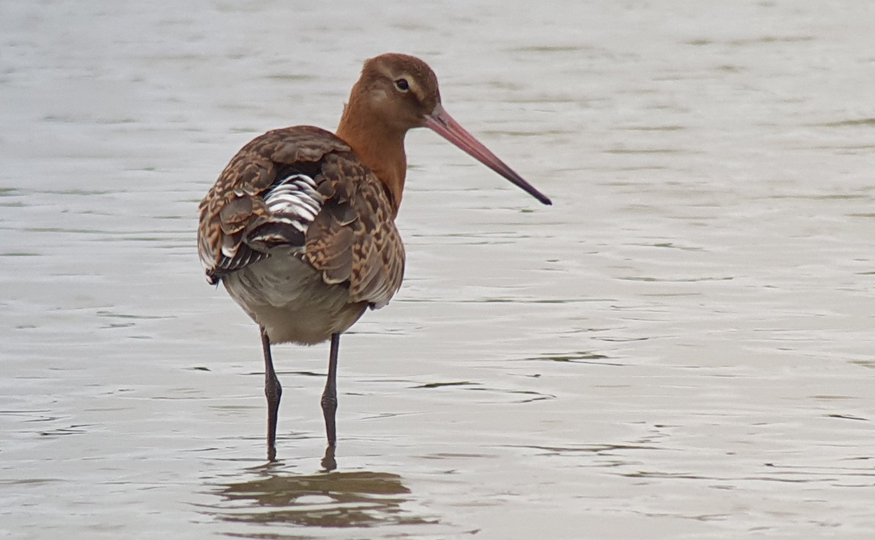