How farmers can help restore the curlew

The curlew - our largest wading bird, may well be familiar to many thanks to its evocative call and song. If you’ve heard them calling it’s not something that you forget. You may have heard them but may not have even realised that it was a curlew as the call is far carrying. They’re also remarkable for an outrageously long down-curved bill, the perfect adaptation for finding prey that other species simply cannot reach. Combined with their size, it is a distinctive wading bird, only the smaller whimbrel is a possible confusion species during migration periods. 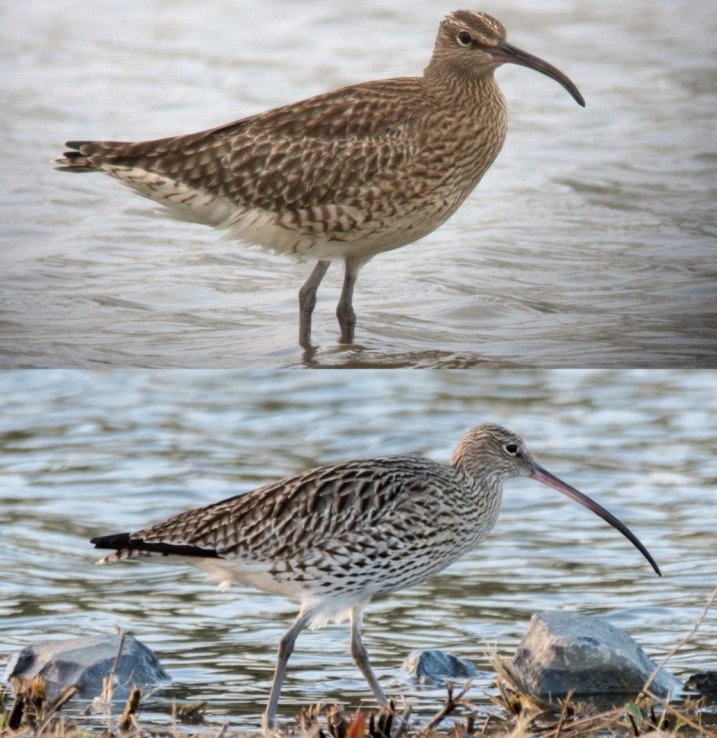 As with so many wetland species the Eurasian curlew is in decline. Many favoured haunts have been developed or are heavily disturbed, predation of young, the extremes of the changing climate, intensive land use and more - the list of issues that affect them is extensive. At Slimbridge our monitoring work has flagged up a decline - numbers have nearly halved since the 1980s and early 90s when regular counts of 800+ were made. It’s so worrying to witness our faithful passage/wintering flocks reduce in such a short space of time. You can read more about Eurasian curlew recovery here.

Curlew rely on the wetlands of the UK and Ireland, estuaries, coastal beaches, riverside wet grassland and pasture, as well as all places that overtime have become farmed land - collectively form their winter home. They use every available space to avoid disturbance so they can feed, rest and survive the hardest months of the year. Our relatively mild winters allow them to stay with us throughout the year.

The same wintering wetland habitats are also used to take a break in migration by those birds that are returning to their respective breeding grounds in Scandinavia and the near continent, but a significant number choose to nest in a variety of UK habitats - very few of which haven’t been influenced by human activities in some way. Hay meadows, heaths, bogs and upland hills are all places where you may find curlew breeding but they have also adapted to a range of nesting sites including crops, pasture and airfields.

In Gloucestershire for example they nest in hay meadows along the River Severn and upland hay fields in the Cotswolds and open areas of the Wye and Dean. A small population clings on but has been diminishing, action was needed to prevent losing them as a breeding bird.

A brilliant initiative called the Curlew Recovery Partnership was launched in March 2021 encouraging direct action to halt and hopefully reverse the decline. WWT is a partner, crucially this involves landowners and land managers that are keen to help this species, for full details click here.

A few sites have already seen releases of headstarted young birds. Headstarting is a project where under license eggs are collected, artificially incubated and hand reared. The young are released soon after which increases chick survival and helps to bolster the population until such time that other issues can be resolved. An attempt to rescue a population whist it still exists is likely to be more successful as headstarted birds have the opportunity to learn from the wild reared counterparts. 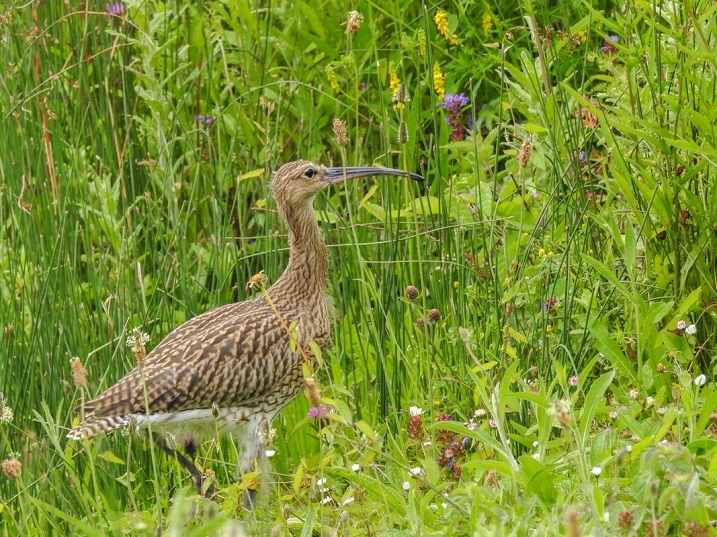 I’ve also been hugely encouraged by our own reserve based work and the recent developments at Slimbridge. A programme of improvements and the way our fields and wet meadows are managed have created a better situation for breeding waders overall. In recent years a pair of curlew gave us the thumbs up (or is that a wing-tip up), despite not breeding here in living memory, a pair chose to take up a territory. They were unsuccessful in their first and third year which demonstrated how tough it can be to raise a family with extreme weather, tidal surges and predators all causing failures at some point - but they successfully reared all four young in their second year. It was brilliant to watch this unfold despite much nervousness on our, and their behalf. Recruiting this pair demonstrated that if you can offer the right conditions and habitat it’s possible to tempt this wonderful bird to colonise or recolonise.

Curlews can be a long-lived species, I dearly hope that ‘our’ pair has a couple more successful seasons and it leads to an increase in breeding pairs within the area we manage. It would be great if our population could spread out locally and we would be keen to involve our neighbours. Headstarted birds were released at Slimbridge in 2019 with many subsequently seen in the area. One of our tenant farmers, told me he was “so pleased to see and hear them in the fields” whilst out checking his stock. The headstarted birds should soon be reaching breeding age - they might even pair up with one of the wild reared young of the same year.

We do everything we can to offer ‘our’ curlew all they need through the seasons, we hold the cattle grazing off for as long as possible, erect temporary electric fencing to protect nests, protect high tide roost sites and manage winter water levels to offer perfect feeding conditions for our wintering population. If you have visited during milder spells in the winter you may well have already enjoyed watching and listening to a flock of three hundred or more as they probe for earthworms in the wet grasslands.

We know that ‘our’ birds use the fields that we manage but they are highly mobile and will choose feeding and roosting places depending on season, weather and availability. A patchwork of hundreds of fields and inter-tidal zones form their ‘beat’, often flying some distance each day to find enough food, this combined network of sites is crucial for their survival.

To reverse local declines we need to set aside the odd field here and there for late hay cuts and when the time is right, to mow those fields in a sympathetic way to allow chicks to escape or prevent them from being completely exposed to predators, allowing wet spots to form on some fields in the winter rather than completely drain them. It has been so encouraging to know that members of the farming community along the Severn hay meadows have been trying to save their curlews with such positive and proactive measures.

Escape to the Farm

Many people will be familiar with Kate Humble as presenter on a wide range of television programmes which have included the ‘Watches’ - Spring, Autumn and Winterwatch. Kate is the current President of WWT, has a keen interest in conservation and also farms land in just over the border in Monmouthshire. The farm and all those involved in the day to day running of the land feature in episodes of ‘Escape to the Farm’ on Channel 5.

Farm manager Tim noticed curlew feeding on parts of the land in late winter and early spring, after asking local people he discovered that they used to regularly occur, it seemed that they may have also bred there at one time. Both Tim and Kate were keen to see if anything could be done to encourage them to stay longer and perhaps to breed again. During the Covid lockdown many staff were furloughed but as I was still covering duties I was asked if I could help out. I assisted their cameraman so he could shoot some footage of the curlew at Slimbridge, but also to talk about this species.

A visit by Kate and Tim was made on one wet day in February where they could learn more about the birds, I was also invited to visit the farm to see if I could offer any habitat advice that might help to encourage curlew back to the farm. It was great to have a look around and see the main area which they had frequented. It was obvious why curlew were attracted to this part of the farm - it’s situated on high, fairly open ground which was also damp and had a little stream/spring running through it which created a spongy wet ‘wild’ area. It was perfect for foraging birds but also offered some cover in the form of rush.

We discussed requirements and how it could be enhanced to create a larger area of habitat and how to encourage the openness of the site that curlew prefer. They don’t like to be overlooked by tall trees during the breeding season as these can be used as a lookout perch by predators. Tim was very keen to get started, but the approaching bird nesting season was nearly upon us. It was decided that it was something to put on hold until later in the year when it would be drier and much easier to use an excavator when scraping out shallow hollows and creating an embankment to retain a slightly higher water level.

Ensuring wet areas with cover are available during the summer increases the chance of chick survival. If one small part of a farm could be set aside it could allow chicks to survive - even if they fledge just the one or two every year, the population has a chance of at least stabilising. With ‘Curlew Champions’ looking out for them it bodes well.

It was good to spend time on the farm with Kate and to chat more with Tim, this optimistic farm manager was passionate and knowledgeable about the wildlife as well as the farm. I left with high hopes that with such caring people looking to make a difference we could see the curlew returning to places where they have been lost.

As I returned home to Gloucestershire across the great expansive wilderness of the Severn estuary via the Severn Crossing, I thought about the remaining curlew that feed and roost on the mudflats below and pondered on where they had now gone, some could already be in the hills around Monmouth and South Wales, others might already be halfway to Scandinavia or beyond.

This year our pair once again returned to their territory at Slimbridge, a cold dry April with little grass growth was followed by a storm laden and rain soaked May, a poor start for them but they seem to have at last settled down for a very late season nesting attempt. We’ve also noted curlew returning to the Severn during May, maybe some of these are young birds that haven’t bred, perhaps adults that gave up this year in such trying conditions.

In just a month or so our seasonal cycle will resume as we prepare to welcome back flocks of this special bird, do visit us to experience and learn more about them and let’s ensure that an essential part of the UK’s wild soundscape is not lost forever. 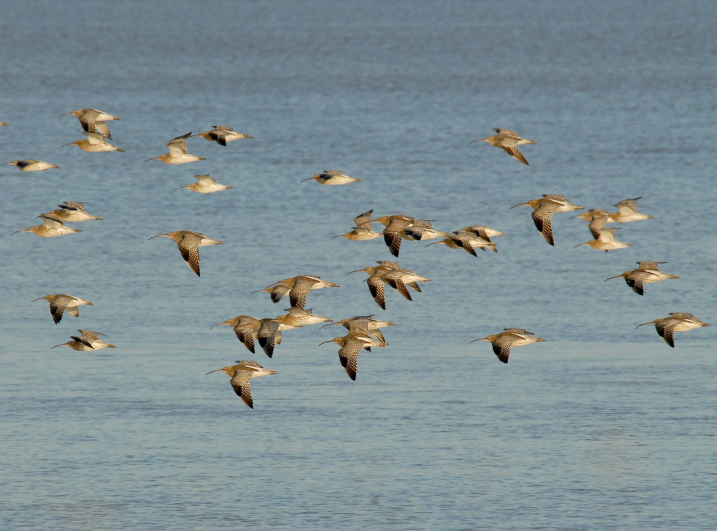 Martin McGill and Slimbridge featured on Escape to the Farm on Channel 5 at 8pm on Thursday 10 June. The episode is available to watch on catch up here.